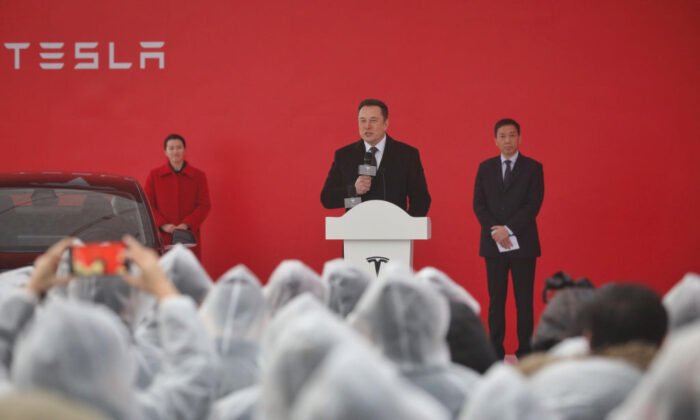 Tesla boss Elon Musk speaks during the ground-breaking ceremony for a Tesla factory in Shanghai on Jan. 7, 2019. (STR/AFP via Getty Images)
Chinese Regime

Recently, a short video of veteran radio host Wang Li talking about how the Chinese media managed to mislead the public and ruin Tesla’s reputation was circulated widely on the internet.

In the video, Wang said a fan asked him about how anyone could dispute the reports that come out every day in China about a Tesla being involved in an accident.

Wang said, “I have been a journalist for more than 30 years. For traffic accident reports, there is a certain format: time, place, people involved, how it happened, and the liability conclusion.” He said the last item about who is responsible for the accident is very important, as the conclusion comes from the police in the standard traffic accident report format.

However, for all the news about Tesla accidents, the last item, a liability report from the police department, is always missing. Instead, it is always the author of the report themselves saying that it was Tesla’s brake failure that caused the accident.

“That is the so-called ‘set the tempo’ for the game: You see what they want you to see,” he said in the video.

Wang Li continued to say that there are more than 200,000 traffic accidents in China every year, killing about 50,000 people. There are more than 500 car companies in China, “If we divide them into individual brands, on average, there will be more than one traffic accident per brand every day, and on average, there will be one fatal accident every three days. There are so many brands and so many accidents, how come they are not reported in the media? Why is only Tesla singled out?”

Wang also shared a story in his video that a netizen went to a parking lot especially for vehicles that have been involved in traffic accidents near his home. He found over 100 damaged cars there, but not a single Tesla.

Wang said each traffic police brigade has a parking lot dedicated to vehicles that have been involved in traffic accidents. “You can go there and check: How many are Tesla cars?” Wang challenged his viewers.

When retweeting this video, Cai Xia, a former professor at the Central Party School of the CCP, said, “This veteran journalist’s revelation of how the totalitarian regime ‘set the tempo’ and lie to brainwash people is really revealing! Totalitarian ideology is infiltrating and brainwashing all over the place. It is everywhere. Stick to basic common sense, ask a few more questions about why, how, and what … one must stick to independent thinking in order not to be brainwashed by the false propaganda of lies.”

Wang Li graduated from China Central Radio and TV University and is the first generation of a live broadcast host in East China known as Wang Dapeng. He has been the host of “Car News” and “Dapeng Talks about Cars” on Jiangsu Traffic Radio Network.