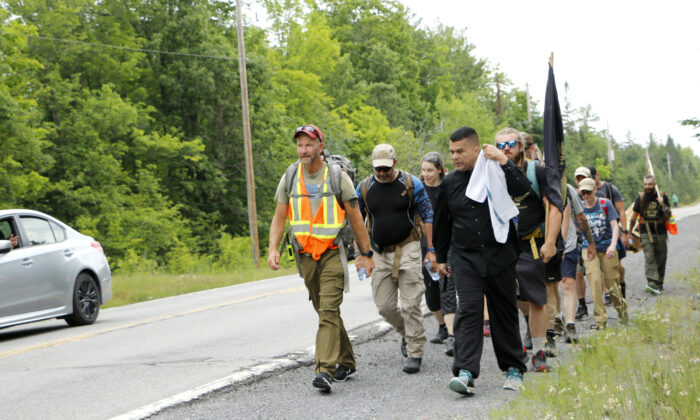 Veteran James Topp (L) and his group walk on a rural road west of Ottawa, as the driver of a car waves, on June 29, 2022. On Topp's left is epidemiologist Dr. Paul Alexander. (Noé Chartier/The Epoch Times)
Canada

KANATA, Ontario—Looking at James Topp walking along the rural roads of Kanata Wednesday, one wouldn’t guess he was about to complete his arduous trek from Vancouver to Ottawa.

It was just another day of getting down to business and putting more miles under his belt.

And so Topp, a military veteran, current reservist, and RCMP civilian employee, pushed along country roads west of Ottawa with between 20 and 40 associates and followers in tow throughout the day, including his core team who had been with him from the beginning.

Along the way, motorists often pulled over to give Topp a handshake or a hug.

Some supporters waited along the route and joined the march for a few kilometres.

Topp undertook his 4,300-kilometre walk from the Terry Fox statue in downtown Vancouver to the War Memorial in Ottawa to protest vaccine mandates, which have impacted him in both the military and the RCMP.

It was a relatively easy day for Topp and the group, walking a meagre 27 kilometres from Dunrobin to Bell’s Corner—a piece of cake compared to those days when they logged over 50 kilometres.

Despite the short day, it was still a grind for those who had developed blisters or were nursing other injuries.

The supporters come from all over. Some joined Topp’s team back in Vancouver, while others tagged along from Winnipeg. Not all have been affected by the vaccine mandates, but many have: soldiers, a nurse, an early childhood educator.

For Topp and his crew of 12, it was time on Wednesday to take stock of the journey, a stone’s throw from the finish line.

“I want to celebrate all the people who have participated in this journey to get me here because it wasn’t just me doing this, it was a number of folks who rotated through marching, driving, managing, calling people, sending letters,” Topp told The Epoch Times while walking in the rain.

“It’s a shame that more people aren’t paying attention to this because there’s this amazing story of a group of people that came together.”

Topp said he believes he has accomplished what he set out to do back in February, noting a meeting he had with MPs on June 22. That meeting was made possible by “thousands” of people he met along the way, he said, who contacted their MPs to let them know about Topp’s effort.

The MPs “did what they’re supposed to do, they listened to people in their ridings and they acted on their behalf. That’s how the system is supposed to work,” Topp said.

The meeting in Ottawa was attended by around 20 Conservative MPs, some of whom have been very vocal against federal COVID-19 restrictions.

Topp hopes that his advocacy has helped “nudge” the government in recently deciding to suspend its vaccine mandate in federally regulated workplaces and for travel.

The veteran said he has not thought about what comes next for him, as all his mental energy is focused on finishing the task.

Dan Jones, who’s been with Topp since the start, has given this some thought and he wants to keep working toward a better world.

“What’s next for me is carry on,” he told The Epoch Times. “I want to promote unity, and we need everybody in the world to come together and join forces and sit down peacefully together and help each other.”

Jones said it feels “amazing” to be almost done and to accomplish a goal.

“Even though I never walked the whole way—I spent more time injured than not—still, we’re reaching the end and I’m still on my two feet. I still have two feet. It was a wonder at the beginning there.”

The group will depart for the last leg of the journey Thursday morning at 10 a.m. from Bell’s Corner. They expect to arrive at the War Memorial in downtown Ottawa in the late afternoon.