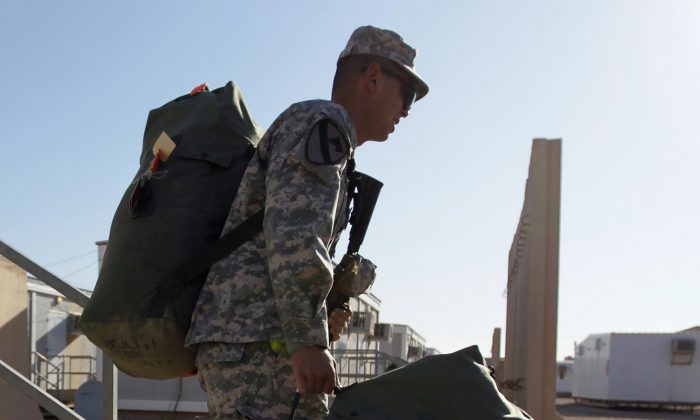 U.S. Army Private First Class soldier from Sacramento, California carries his gear to a staging area as they wait for the orders to convoy to Kuwait from Camp Adder on December 6, 2011 at Camp Adder, near Nasiriyah, Iraq. (Photo by Joe Raedle/Getty Images)
Southern California

ALHAMBRA, Calif.— “We’re asked to serve our country, but yet in return, what happens? A slap in the face,” said JR Duarte, District Commander for the 18th District at a press conference at the American Legion Post 139 on Friday, Oct. 28.

“It’s something that’s kind of embarrassing, in my point of view.”

The California National Guard has ordered nearly 10,000 veterans to repay enlistment bonuses that were given due to mismanagement and corruption. Those who didn’t have the money were faced with tax liens and wage garnishments.

“In the aftermath of this criminal behavior, thousands of innocent vets who had nothing to do with the wrongdoing are now being forced to pay for the crimes of others. This is more than unfair. It is creating extreme financial stress and undo hardship,” said Congress member Judy Chu at the press conference.

“That is not the way to treat our men and women who volunteer to serve and defend our country,” said Rep. Chu.

Reps. Chu and Janice Hanh called for legislation to permanently block the Pentagon from asking veterans to repay reenlistment bonuses. They also want to reimburse those who have already paid, with interest.

Rep. Hanh said she became aware of the problem earlier this year when veteran Donald Ornelas came into her office. Ornelas had accepted a $30,000 reenlistment bonus in 2005 to return to Iraq.

“He put his life on the line for our country, and it cost him dearly,” said Rep. Hanh.

Ornelas was injured by an IED explosion and had to return home early, permanently disabled. Years later, he was contacted by the California National Guard and told to repay his bonus because he did not complete his tour of obligation, said Hanh, but he did not have the money.

Under intense public backlash, Secretary of Defense Ashton Carter suspended the forced repayment demands on Wednesday, Oct. 26, but the Congresswomen said it was only a temporary solution.

Chu said a provision in the National Defense Authorization Act would cancel bonus repayments moving forward, but would not apply to veterans who already repaid.

Chu and Hanh said when Congress returns next month, they will immediately push for new legislation.

Veterans at the meeting urged everyone to contact their representatives and urge them to lend their support.