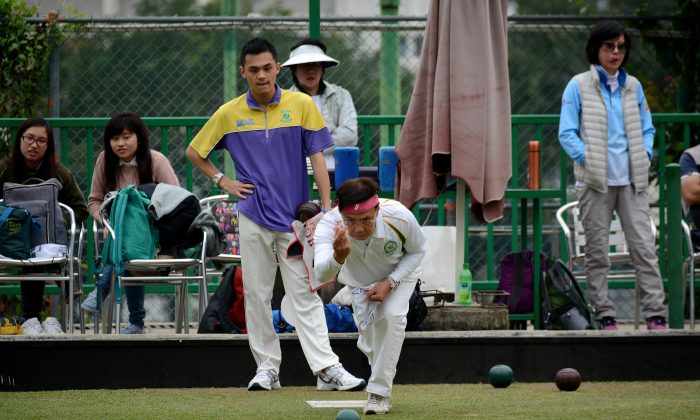 Veteran bowler David Tso (front) of Craigengower Cricket Club delivered the winning bowl at the semi-final of the National Fours against the Hong Kong Youth Team at Filipino Club on Sunday March 1. The CCC team beat the youngsters 24:16. (Stephanie Worth)
HK Lawn Bowls

HONG KONG—Veteran bowler David Tso is on course for his first national trophy since 1998, after defeating a strong Youth Development team in the semi-finals of the National Fours last Sunday, March 1.

Well decorated Tso has collected 12 major trophies in his 40+ years bowling career and has won a number of prestigious titles for Hong Kong, included two gold medals at Asia Pacific Championship (both Triples in 1985, 1991).

The Youth Development team was skipped by Adrian Yau, who lost the National Fours at the same stage last year. He was supported by Steven Tung, Ha Yat Long and Bosco Li this year.

The semi-final started in crazy fashion, with both teams scoring four shots in the first two ends. From then on both sides played cautiously and the CCC team was leading by just one shot half-way through.

The Youth team staged a fight back and pulled three shots each in the following two ends but the CCC team geared up to take the next two ends and finished the game 24-16.

Tso was delighted after winning the game and looks forward to the final later this year: “I stopped bowling in 2003 because of golf and only came back to the sport in 2011. Since then I have been in the finals of the 2-4-2 Pairs and the National Pairs but, unfortunately, both were lost.

“I am now back in my good form and am fully committed to perform in the final. I also hope that my success will bring me back to the Hong Kong team,” said a confident Tso.

The final will be played in the first final day of the year, which is scheduled for June 28.