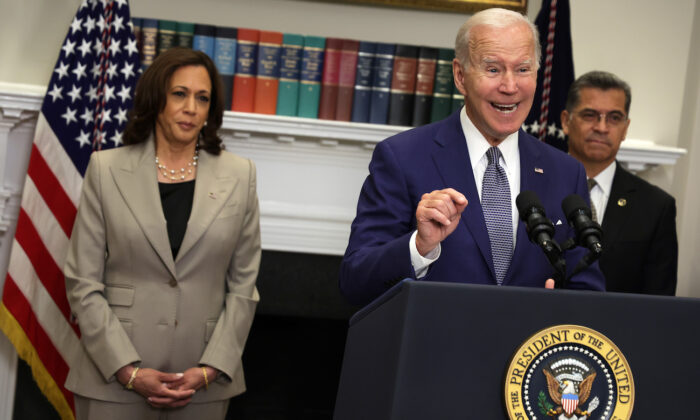 An unfavorable midterm election scenario is taking shape for Democrats as inflation and gas prices remain exceptionally high as some left-wing news outlets appear to be turning on the Biden administration, according to analysts and pollsters.

A recent New York Times survey posted on the paper’s front page Monday suggested that Democrat voters are turning against Biden. Only about 25 percent said they wanted him to be the presidential nominee in 2024. Meanwhile, the NY Times and other left-wing outlets have increasingly published articles suggesting that the president not run for reelection.

“Democrats haven’t done things they promised,” Connor Farrell, a strategist who founded the Democrat-aligned group Left Rising, told The Hill on Tuesday. “In this environment, the best general election candidates will be bold [ones] that can distinguish themselves from what we’re getting from the White House.”

“Democratic leadership should look no further than the fact that they need to wake up and step up to the plate,” Jon Reinish, managing director at the political strategy firm Mercury, told the website. He did not elaborate what that might entail.

Democrats, he added, are “not just losing Independents or you know, Never-Trump Republicans,” but “they’re losing their own voters. Democrats’ own voters don’t feel as if their leaders hear their concerns.”

“I don’t want to sound overly pessimistic, but I’m not holding out hope that Biden’s approval rating can improve all that much. Gas prices have started to drop, but inflation remains high, and survey after survey shows that Americans are principally concerned with their economic situation. Another [Federal Reserve] rate hike is on its way, which isn’t bound to make things better in the short term for voters,” Democrat strategist Jessica Tarlov told Fox News this week.

And an article released by pollster Gallup, citing its own polling data, declared that the 2022 election indicators suggest Democrats are facing a significant uphill battle.

“However, 2022 is not shaping up to be an average year. Rather, as of May, Gallup finds presidential job approval and three other key national mood indicators well below the historical averages measured in past midterm election years. On their own, those numbers would all predict a greater-than-average loss of seats for the Democratic Party this fall,” Gallup said last month.

Typically, the party of the president tends to lose seats in the midterm elections, and Democrats have narrow majorities in both the Senate and House.

Surveys released in recent days indicate that Americans have a generally negative outlook of the direction the United States is heading and have a bleak outlook on the economy amid historically high gas prices and high inflation. Auto club AAA’s data shows that while gas prices have dropped over the past three weeks, the average price still stands at $4.65 per gallon as of Tuesday.

Although some Democrat-aligned consultants, including James Carville, have suggested recently that the midterms are still several months away, Gallup said that if Biden’s job approval rating increases, “he would be bucking the trend for second-year presidents. Historically, presidents’ job approval ratings have rarely improved in the last few months before their first midterms.” As such, it rated Democrats’ chances as “very unfavorable” headed to November.

Republicans have said that the Biden administration’s policies are the primary reason why inflation and gas prices remain high, noting that the president last year signed executive orders that blocked new oil drilling leases, suspended the Keystone XL pipeline, and ended some fossil fuel subsidies. In response, Biden and Democrats have pinned the blame on oil companies, the Russian government, and even consumers for not buying electric vehicles.

“Americans’ dour evaluations of the president, Congress, the economy, and direction of the country all suggest that the typical pattern by which the president’s party loses seats in midterm elections will hold this year,” Gallup said. “While Republicans need to only pick up five seats in the House to take the majority in that chamber (assuming the vacant seats formerly held by Republicans stay with the party), the national mood is such that 2022 has the potential to be a wave election for the Republican Party and the GOP could have a more comfortable governing majority.”

It concluded: “Regardless of what issues might drive voter behavior, unless Americans’ opinions of the job Biden is doing and the state of the nation improve over the next five months, the Democratic Party may face a situation similar to 1994 and 2010 when it suffered major losses in its presidents’ first midterms but regrouped in time to win the presidential election two years later.”

In a comment Tuesday, the Democratic Congressional Campaign Committee claimed that Democratic lawmakers seeking reelection are “untethered” from Biden’s approval rating. The Epoch Times has reached out to the organization for comment.

“Frontline Democrats remain untethered from President Biden’s approval rating and consistently perform ahead of the generic ballot despite the global challenges we face because Democrats are defending the right to an abortion, have delivered record-high job creation and infrastructure investments that voters have demanded for years,” Democratic Congressional Campaign Committee spokesperson Chris Taylor said in a statement.