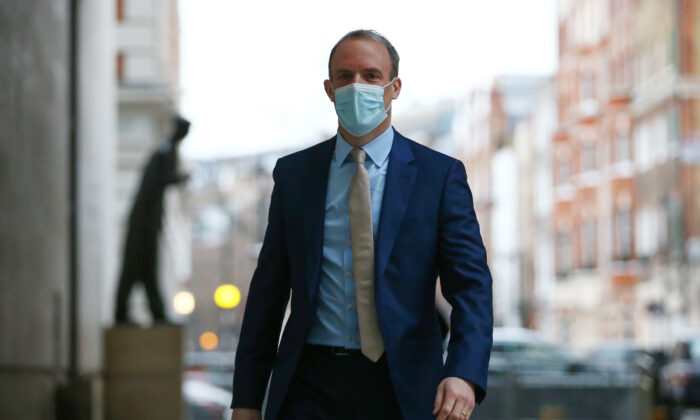 There is a “very significant” risk that Russia will carry out an invasion of Ukraine, Britain’s Deputy Prime Minister Dominic Raab has said.

Western allies have made clear there would be “very severe economic consequences” for Russia if its troops cross the border into Ukraine, Raab told the BBC’s “Sunday Morning” programme.

“We want allies across NATO to understand the seriousness of what is going on,” he said.

Raab said the UK wants Russian President Vladimir Putin to “step back from the brink,” but said he thinks “there is a very significant risk” of the invasion taking place.

He added, “The world needs to keep its eye on this and be very clear with President Putin that it would not do this cost-free, that there would be a price—a price in terms of the strenuous defence that we would expect the Ukrainians to put up, but also the economic cost through sanctions, which are of course more effective if the international community speaks as one or at least with a broad consensus.”

Raab’s warning came as the UK accused Putin of plotting to install a pro-Moscow leader as head of the Ukrainian government.

In an unusual step, the UK Foreign Office on Jan. 22 named former Ukrainian MP Yevhen Murayev as a potential Kremlin candidate to take over in Kyiv.

In a statement, Foreign Secretary Liz Truss said the Russian plotting showed the lengths to which the Kremlin was prepared go to “subvert Ukraine.”

“Russia must de-escalate, end its campaigns of aggression and disinformation, and pursue a path of diplomacy,” she said.

The Russian foreign ministry accused the UK of circulating “disinformation,” and urged the UK Foreign Office to “cease these provocative activities” and “stop spreading nonsense.”

Talking to Times Radio on Sunday, Vadym Prystaiko, Ukraine’s ambassador to the UK, said a Russian invasion is “very likely” but “there is still room for diplomatic resolution.”

He said Ukraine is “prepared to fight” but said the country is not well-equipped for a prolonged fight.

Britain’s main opposition Labour Party said it is “completely unified” with the government on its approach to Russian aggression in Ukraine.

Shadow attorney general Emily Thornberry told Sky News, “We have to be strong and we have to be unified, whether it is in NATO, our surrounding allies, and we have to play our part as the opposition also in making sure we in Britain stand unified against this threat.”

Thornberry also urged the government to utilise a “new generation of sanctions,” including investigating the “unexplained wealth” of Putin allies living in the UK.