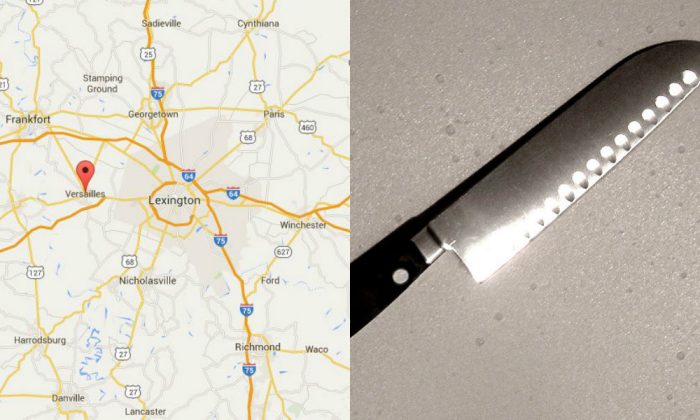 Google Maps and Wikimedia Commons
US

‘This is a horrible situation’: Versailles, Kentucky Boy Killed in Knife Attack in His Bedroom

LOUISVILLE, Ky. — A kindergartner was killed in a pre-dawn attack Monday when an Indiana man broke into a home, grabbed a large kitchen knife and stabbed the boy multiple times in his bedroom, police said.

Ronald Exantus is about to be arraigned in Woodford, Co., Ky. He’s accused of murdering 6 y/o Logan Tipton today. pic.twitter.com/npTTpBfX8X

Ronald Exantus, of Indianapolis, was charged with murder and first-degree burglary, according to an arrest citation. Police did not immediately provide a possible motive for the break-in and slaying and the boy’s family said they hadn’t seen Exantus before.

An attorney for Exantus questioned his mental competency and said she wasn’t able to get any information from him when she tried to talk to him after the killing.

Woodford County Deputy Coroner T.A. Rankin identified the slain boy as 6-year-old Logan Tipton. He lived with his family in the small town of Versailles, near Lexington in Kentucky’s thoroughbred and bourbon country.

Two of the boy’s sisters suffered non-life-threatening cuts in the attack, and the suspect was held by the boy’s father until police arrived, the arrest citation said.

“He was able to get him on the ground and get him subdued until officers could get there,” said Versailles police Lt. Michael Fortney said.

Investigators were trying to determine if the suspect had any connection to the area, Fortney said.

Exantus, 32, appeared in a Woodford County courtroom a few hours after the killing, shackled in an orange jumpsuit, and entered a plea of not guilty. District Court Judge Vanessa Dickson set his bond at $1 million and appointed a public defender to represent him.

Bridget Hofler, his attorney, questioned his mental competency. She told reporters he was unresponsive when she asked him about his background and family. He didn’t know his mother’s phone number nor could he tell her his occupation or what he was doing in Versailles, she said.

“I have discussed various things with him on two separate occasions this morning and he’s not able to really discuss anything; he’s not here,” she said. “I was not able to communicate with him whatsoever to really determine anything.”

She told the judge that she has heard her client is a registered nurse, but has been unable to confirm that. The Indiana Professional Licensing Agency lists a Ronald Exantus of Indianapolis as having an active nursing license.

“This is a horrible situation. The thought of what these parents are going through, I can’t even begin to imagine that,” she said. “But my client does have certain rights and it’s my job to see that those rights are protected as best I can.”

The police citation alleges that Exantus entered the home and walked around the residence before the attack. The suspect — described as 6-foot-tall, 260 pounds — went to an upstairs bedroom where the boy was asleep in his bed, the citation said. The boy was stabbed several times in the head area, it said.

Logan was a kindergartner at Simmons Elementary in Versailles. His classmates were told by their teacher and principal that he had died, but not told about the circumstances of his death, said Woodford County public schools Superintendent Scott Hawkins.

Staff members at Simmons Elementary said Logan seemed to always have a smile.

“He was extremely well liked,” Hawkins said. “He had a lot of friends at the school. Just a great, great little boy, and one that you certainly loved having in your building.”