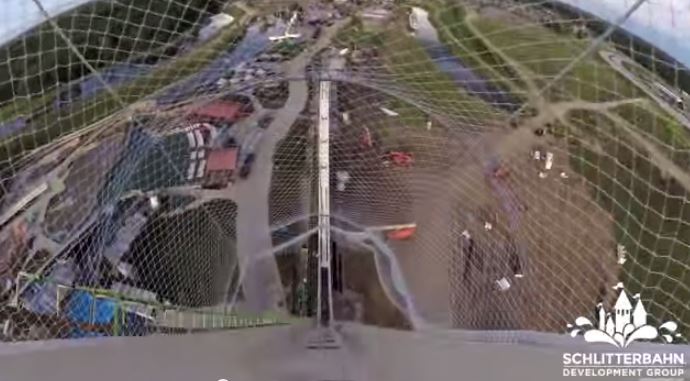 The Verruckt water slide. (YouTube/screenshot)
US

The world’s tallest water slide–the Verruckt in Kansas City–is close to finally being opened, but is still being tested.

The 168-foot slide, which offers a 50-foot drop, was supposed to open several times but the date has been pushed back because the park wants to ensure that it’s actually safe.

Especially because local broadcaster KSHB recently reported that a test featuring sand bags on rafts during hundreds of tests at times launched the bags into the air.

To prove that the slide is actually safe, two of the architects behind its creation–waterpark designer Jeff Henry and ride engineer John Schooley–recently went down it themselves, and recorded a point-of-view video for people to see.

The slide is 78 stories tall, the company points out, taller than Niagara Falls.

Now that the opening date has been pushed back again (it was supposed to open on Memorial Day weekend–the company hasn’t listed a new date.

But people say that once it’s open they’ll ride it.

“We’d love to,” Derek Potts said, who was visiting the water park with his 10-year-old daughter during the recent tests.

He watched the end of a test run where the raft slowly made it over the final hill.

“That seems probably more assuring than if it were going too fast and the have a little net on the side so it looks that will catch you if you fly off of it,” he said.