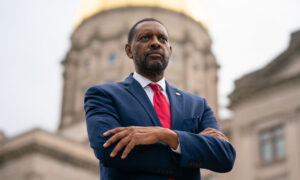 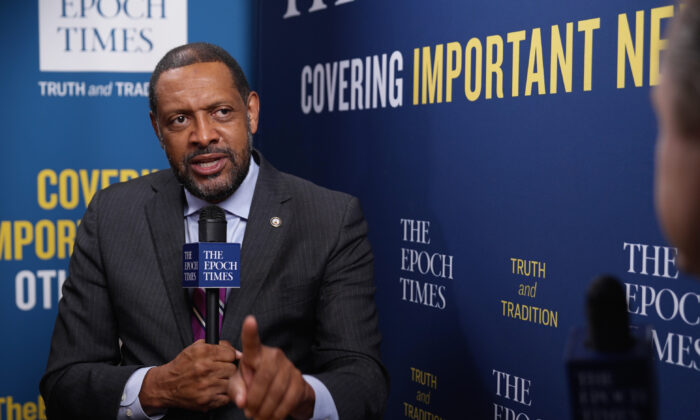 Former Georgia state Rep. Vernon Jones, during an interview for the "American Thought Leaders" program, at the Conservative Political Action Conference in Orlando, Fla. on Feb. 27, 2021. (The Epoch Times)
Republicans

Georgia gubernatorial candidate Vernon Jones is heading to Arizona this week to tour the 2020 election audit taking place there.

Jones, a Republican who is challenging Georgia Gov. Brian Kemp, plans to touch down in Arizona late Tuesday. On Wednesday, he will visit with Arizona legislators and see firsthand the forensic audit at Veterans Memorial Coliseum in Phoenix.

“We’ll be doing a lot of high level meetings there with the people who have been the primary organizers of the audit,” C.J. Pearson, Jones’s campaign manager, told The Epoch Times.

Jones, a former state representative who vocally supports former President Donald Trump, is traveling with Bernard Kerik, a onetime police commissioner of New York City. Kerik, a Republican, was pardoned by Trump in 2020 of felony charges including tax fraud. Kerik did not respond to an inquiry. A local sheriff will also join the group after they land, according to Jones’s team.

Auditors in Maricopa County are recounting the nearly 2.1 million ballots cast there in the presidential election last year. They’ve also been examining hundreds of tabulators and other election machines. An Arizona Senate panel authorized the audit in late 2020. It started in April after months of legal wrangling with county officials, who believed the subpoenas were too broad but largely complied when ordered to do so by a judge.

A delegation from Pennsylvania toured the Coliseum and met with Arizona lawmakers last week. Delegation members said afterwards that they support a similar audit in Pennsylvania. They soon received backing from a top state senator.

“That’s exactly what the goal is,” Pearson said.

Jones has called for an audit multiple times, dating back to November 2020.

“The only people that fear transparency are people with something to hide,” he wrote in a tweet last month.

Georgia officials conducted multiple recounts in the wake of the election because the margin of victory for Democrat Joe Biden over Trump was so slim. They also did signature audits in several counties. Georgia Secretary of State Brad Raffensperger, a Republican, has said the reviews affirmed the election results. He has also said that fraud did occur but that the cases were not large enough to change the outcome of a statewide election.

Biden beat Trump by 0.26 percent, or 12,670, according to the official results. The results after the first recount, during which four counties found uncounted or unreported votes, showed nearly 900 fewer votes for Biden, and 17 more for Trump.

Jones and other Republicans in the state have tried pressuring Kemp, a Republican, to authorize an independent audit. Jones and hundreds of others from the GOP in a recent open letter calling for an audit referenced the Arizona effort.

“We know for a fact that audits work in detecting discrepancies. In Arizona, elected officials began an audit of votes from the 2020 election in Maricopa County–a county that holds more than half of the state’s population,” they wrote.

Fann in the May 12 letter conveyed concerns from auditors that a database was deleted and discrepancies were found in ballot counting. The county later attempted to rebut the claims.

Kemp has said he does not have the authority to order an audit. The Georgia Legislature has so far not ordered one.

Asked about Jones’s push for an audit, a Kemp spokeswoman told The Epoch Times in an email that the governor “was the first to call on Secretary Raffensperger to complete an audit of signatures on the overwhelming number of absentee ballots that were cast during the election.”

“To ensure that it is easy to vote and hard to cheat in Georgia, Governor Kemp was proud to sign SB 202 into law. By requiring a photo ID to vote absentee, mandating drop boxes in all 159 counties, and preventing ballot harvesting, Governor Kemp took action to restore trust in Georgia’s election system,” she also said. “While Governor Kemp was disappointed with the outcome of the 2020 election, he is laser focused on ensuring that future Georgia elections are more accessible, safe, and secure.”