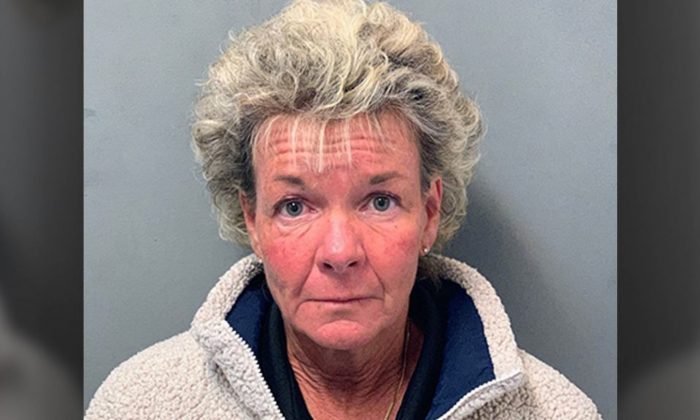 Stacey L. Vaillancourt, 53, of Rutland is seen in this booking photo taken on March 18, 2019. (Vermont State Police)
Crime and Incidents

A Vermont child care provider has been arrested in the death of a 6-month-old baby who police said suffered a fatal overdose of antihistamine given to help her sleep.

Stacey Vaillancourt, 53, of Rutland, was taken into custody on Monday, March 16, on suspicion of manslaughter and cruelty to a child arising from the January death of 6-month-old Harper Rose Briar, Vermont State Police said in a news release.

Vaillancourt ran a state-licensed day care out of her Rutland home.

‘Manner of Death Was Homicide’

An autopsy report cited by police revealed the infant’s cause of death.

“Toxicology testing determined that Harper Briar had high concentrations of diphenhydramine in her body,” the news release said.

“The Chief Medical Examiner’s Office determined the cause of Harper Briar’s death was diphenhydramine intoxication, and the manner of death was homicide.”

Diphenhydramine, the active sedating ingredient in over-the-counter antihistamines such as Benadryl, should not be used on infants without a doctor’s order, according to the news release.

Police said there was no doctor’s order recommending the drug be given to the deceased child.

Emergency Medical Services personnel responded to a 911 call made on Jan. 24, 2019, from a registered in-home day care facility in Rutland City, according to the police.

When the medical crew arrived, they found the 6-month-old infant unresponsive.   The child was transported to Rutland Regional Medical Center, where she was pronounced dead.

Investigators initially believed there was nothing to indicate the death was suspicious but noted in a Jan. 25 news release the “inquiry remains active and ongoing.”

Detectives from the Vermont State Police’s Bureau of Criminal Investigation joined the investigation, officials announced in the news release, adding, “Together with the Rutland City Police Department and Vermont DCF are continuing to investigate the circumstances surrounding Harper’s death Vaillancourt was arrested following the results of the autopsy.

“The arrest Monday, March 18, 2019, follows continued investigation and the completion last week of a final autopsy report from the Chief Medical Examiner’s Office in Burlington,” the police said.

The police noted further information about the case would be available in the affidavit of probable cause filed with the court.

The Burlington Free Press reported as of 4:30 p.m. Monday, no sworn police statement nor other documents in the case had been made publicly available.

The news outlet reported that a judge had found probable cause.

The baby’s obituary in the Rutland Herald said she was the daughter of Marissa Colburn and Blake Briar, and “taught her parents the true meaning of unconditional love and happiness.”

“Harper Rose quickly gained the title of ‘Perfect Princess,’ her beautiful smile made everyone instantly fall in love with her,” the obituary said.

The case of the tragic death of Harper Rose recalls an incident in which three day care employees were arrested in Illinois after police said they were caught feeding children gummy bears laced with a drug.

Police officers were called to the Kiddie Junction Daycare Center in Des Plaines on Friday afternoon, March 1, over a “suspicious incident,” reported NBC.

Melatonin is a hormone found naturally in the body, according to WebMD.

“Melatonin used as medicine is usually made synthetically in a laboratory. It is most commonly available in pill form, but melatonin is also available in forms that can be placed in the cheek or under the tongue. This allows the melatonin to be absorbed directly into the body,” the website stated.

People use melatonin to alleviate the effects of jet lag or when they can’t sleep.

Police officers said that the use of melatonin at the day care was not approved by parents.

“Allegedly, this was done in an effort to calm [the kids] down before nap time,” a release from Des Plaines police read.

The employees told police they didn’t think that giving the children melatonin was inappropriate since it can be obtained over-the-counter.