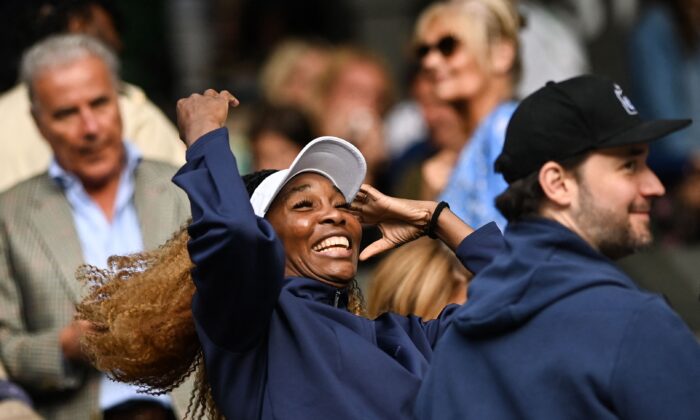 U.S. player and sister of Serena Williams, Venus Williams reacts as she arrives to attend her sister's women's singles tennis match against France's Harmony Tan on the second day of the 2022 Wimbledon Championships at The All England Tennis Club in Wimbledon, southwest London, on June 28, 2022. (Glyn Kirk/AFP via Getty Images)
Tennis

The 42-year-old Williams accepted a wild-card entry into the main draw of the Aug. 8–14 WTA 1000 tournament, organizers said Wednesday.

Williams last competed in Toronto in 2019 and has not played a singles match on tour since the Chicago Women’s Open in August 2021, where she lost in the first round. Her last win came at Wimbledon in 2021.

“I’m so excited to be back playing the National Bank Open,” Williams said. “… I love the city, the tournament, and I look forward to being back in Toronto.”

Williams’ sister, Serena, is also in the field in Toronto, along with 2019 champion Bianca Andreescu of Canada and World No. 1 Iga Swiatek of Poland.

“We are thrilled to have both Venus and Serena playing the National Bank Open presented by Rogers this year,” Toronto tournament director Karl Hale said in a news release. “They have meant a great deal to our sport and having them at a tournament really puts a spark in everyone from the fans, tournament staff, and even the other players. They’re two of the greatest players in history and we look forward to hosting them in Toronto.”

Venus Williams is a 41-time WTA singles champion and a 2000 Olympics gold medalist. She won Wimbledon five times and the U.S. Open twice.