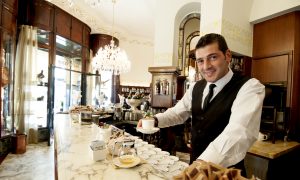 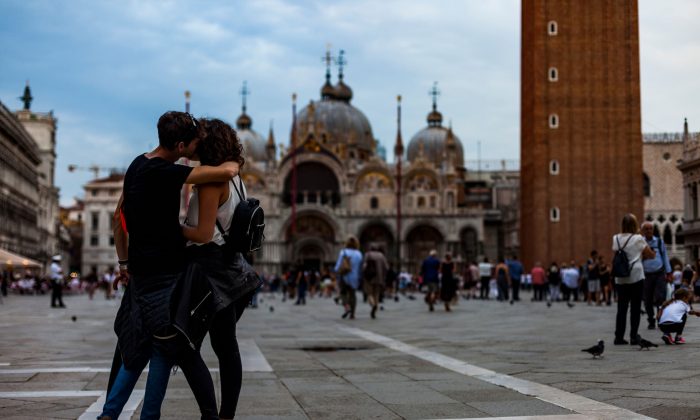 A couple of tourists kiss on St. Mark's Square, with the Italo-Byzantine Roman Catholic Saint Mark's Basilica in the background, in Venice, on Sept. 7, 2018. (Laurent Emmanuel/AFP/Getty Images)
Europe

Italian tourist destination Venice has been approved to start charging visitors entry fees of as much as $11.50 in a bid to cut down on mass tourism.

The decision, made as part of Italy’s 2019 budget, will target day-trippers that arrive on cruise ships. The move follows the introduction of a similar entrance fee that tourists must pay to visit the Aeolian Islands north of Sicily.

Tourists are a contentious issue for Venice, with more than 30 million people visiting annually.

Mayor Luigi Brugnaro said on Twitter that the fee will “allow us to manage the city better and to keep it clean,” and “allow Venetians to live with more decorum.”

The fee is expected to bring in about $57 million a year. Tourists staying in hotels already pay a city tax that brings in about $35 million per year.

While prices are expected to be no more than $6 per person, it could go up to $11.50 in the peak summer season. The fee is expected to be introduced by this year’s high season.

However, Italian authorities said it could be hard to identify and tax tourists who arrive by road, air, or rail.

People who live, work, or study in Venice will be exempt from the fee.

Claudio Scarpa, head of Ava, the Venice hotel managers’ association, told the BBC, “The principle is that whoever visits from morning to evening, contributing just a tiny amount to the revenue from tourism, but imposing costs on our services, must understand that it’s not all there for free.”

The new fee is one measure being taken after the United Nations warned that unless Venice cleaned up its act it would be placed on UNESCO’s list of endangered heritage sites.

In 2015, UNESCO officials said, “The capacity of the city, the number of its inhabitants, and the number of tourists is out of balance and causing significant damage.”

Venice currently imposes restrictions on tourists in an attempt to keep the city clean and free of problems.

There is a long list of finable activities, including drunken behavior, dipping your toes in the canals, and snacking while walking down the street.

Every summer, there are officers who patrol the city’s tourist areas to enforce the rules. Many tourists are unaware that there are special eating areas, away from central hotspots, for the purpose of sitting down and eating.

In addition, so-called angels of decorum are on the lookout for are bare-chested people, people feeding pigeons, or those who gather in groups on bridges.

In previous years, locals have plastered posters on walls reading: “Tourists Go Away!!! You Are Destroying This Area.”

Many tourists arrive by cruise ship, which also has been a source of tension with locals because the ships currently pass by St. Mark’s Square and dock in the city.

Residents said the enormous ships are damaging the historical buildings in the city and polluting the water. In 2016, some took to the water to protest against cruise ships, using gondolas and small boats to prevent cruise ships from passing through the lagoon.

In late 2017, Transport Minister Graziano Delrio announced that by the year 2021, those large ships won’t be allowed to pass through the city. Instead, they will have to dock in Marghera, an industrial town in the center of the Veneto region, with factories visibly belching smoke into the air.

Brugnaro has previously said: “We want it to be clear to UNESCO and the whole world that we have a solution. This takes into account all the jobs created by the cruise industry, which we absolutely couldn’t afford to lose, and we can start to work seriously on planning cruises.”