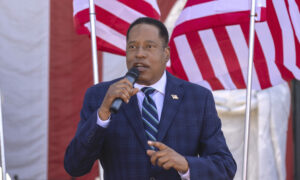 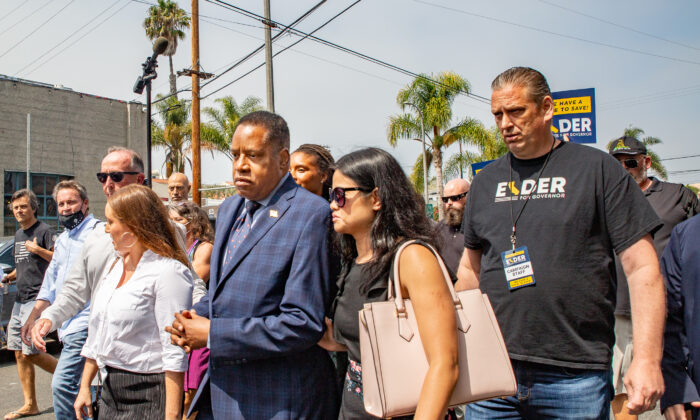 During a walk-through of Elder’s campaign stop at Venice Beach on Sept. 8, over 10 hecklers harassed him, throwing projectiles, and allegedly assaulted his bodyguard.

“It was just all of these vile things. They are yelling sexist slurs at us,” Ursua told The Epoch Times. “There’s other people who then were yelling the N-word.”

A lady in a pink gorilla mask, riding a bike, appeared on video throwing an egg that appeared to narrowly miss Elder’s head.

Although Lunn has been a life-long Democrat and Ursua is a Libertarian, they were disgusted by how the protestors treated Elder and those accompanying him during the walk-through.

According to Ursua, there were seven people accompanying Elder on Sept. 8 touring the homeless encampments, including the president of the Venice Beach Chamber of Commerce.

Ursua was thrilled to tour Elder around homeless encampments so the media could bring more attention to the homelessness issue in Venice Beach.

Ursua claims that they were attacked just a few minutes after they began the tour. The attackers and protesters were hurling eggs and racial slurs at them while they walked through the neighborhood.

Ursua and her colleagues at the neighborhood council have been working closely to improve the public safety and the living conditions of the homeless people in Venice. Ursua said it was an awful experience to see her friend Lunn and Elder insulted with racist slurs.

“We really encourage everyone to come here so that they can see it with their own eyes because it’s a real wake-up call. You can read about these things, but it doesn’t really hit people until they see it, and they can see the awful conditions that homeless people are living in,” Ursua said.

Ursua believes the attackers were politically motivated, sexist, and racist, and she worried that Lunn’s children would have been negatively impacted by the attack as they could see their mother being yelled at with vulgar language.

Ursua and Lunn filed the report as a hate crime, believing these protesters were paid and sent there to embarrass Elder—emphasizing that homeless people don’t have gorilla masks and eggs in their tents.

“They are out there denouncing other elected officials; we feel that this is very coordinated, and we want their identity shown,” Ursua said.

Ursua said it was a racist attack and that no one deserves to be treated like this, saying “no politician has condemned it,” except Los Angeles County Sheriff Alex Villanueva.

“My biggest regret was that I wish I would have ripped it [the mask] off so that everybody could see her face, and exposed her. We want justice. We want to know the identity of that person. … We want this woman caught, and we want her exposed, because she does not represent Venice,” said Ursua.