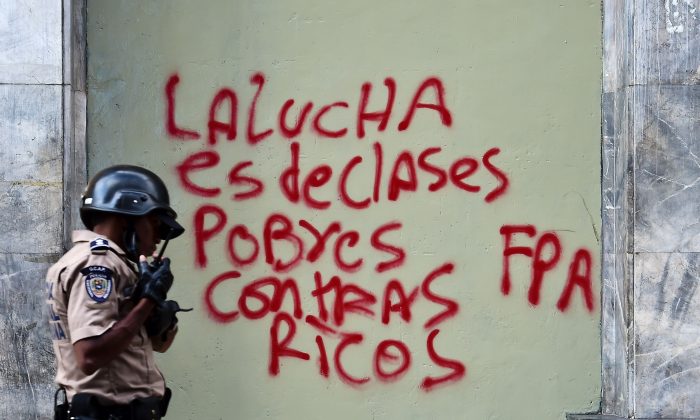 A policeman walks past a graffiti reading "The fight is of poor and rich classes" outside the National Assembly ahead of Venezuelan president Nicolas Maduro's presentation of the annual report before the opposition controlled parliament in Caracas on Jan. 15, 2016. (Ronaldo Schemidt/AFP/Getty Images)
Americas

Venezuelan President Nicolas Maduro admitted before a hostile legislature on Friday that the oil-rich nation is mired in a “catastrophic” economic crisis, hours after decreeing a two-month state of emergency.

Maduro’s first state of the nation address before the newly opposition-held National Assembly, which is locked in a bitter power struggle with his administration, came as Venezuela’s central bank released its first economic growth and inflation statistics in more than a year.

The figures show the magnitude of the country’s recession: the economy shrank 4.5 percent in the first nine months of 2015, the central bank said, while inflation for the same period came in at a painful 108.7 percent, fuelled by crippling shortages.

“These catastrophic figures [are] the result of an economic situation that in another era of regressive neoliberal and capitalist policies would surely have pushed [the Venezuelan] people into unemployment,” said Maduro.

Earlier, the leftist leader sought to seize the initiative in his standoff with the legislature, decreeing a 60-day state of “economic emergency”.

Addressing the legislature, Maduro said the plunge in oil prices over the past year and a half had the country trapped in an “economic storm” that pitted two models against each other.

“The socialist model is the only one, not the neoliberal model that wants to come and privatise everything,” he said to jeers from opposition lawmakers.

“You will have to come and overthrow me if you want to pass a privatisation law. No, no, and no!”

15 Countries in Arrears to UN, Including Venezuela, Lose Vote

Dressed in his red, yellow, and blue presidential sash, Maduro periodically sipped from a white coffee cup, as his mentor, late leftist firebrand Hugo Chavez, used to do.

At other points, Maduro sounded a more conciliatory note, saying he was ready for dialogue.

Addressing the issue of what the opposition calls political prisoners from within its ranks – one of its most acrimonious disputes with Maduro – the president said: “We are ready and willing to talk about this and any other issue necessary to discuss for the peace that Venezuela demands of us.”

“For 17 years, we’ve followed a wrong-headed economic model. Here are the numbers to prove it,” he said, referring to the new statistics.

The current National Assembly, inaugurated on January 5th, is the first controlled by the opposition since Chavez came to power in 1999.

Institutional arm-wrestling threatened to paralyse the legislature until last-minute compromises set the stage for Maduro to deliver his annual presidential report.

After the opposition won a landslide election victory last month, Maduro secured a Supreme Court injunction reducing its majority from two-thirds to three-fifths, limiting his rivals’ powers to force him from office as they have vowed.

But it bowed to pressure from the judiciary on Wednesday, January 13th, when three of its lawmakers agreed to quit while authorities investigate them over the Maduro camp’s allegations of electoral fraud.

Leaders have been wary of fanning tensions, mindful of deadly street clashes in 2014.

The so-called “supermajority” would have allowed the opposition to launch constitutional measures to cut short Maduro’s mandate, which expires in 2019.

Maduro accuses capitalist forces of waging “economic war” on Venezuela by starving it of goods.

Analysts say the political deadlock threatens to worsen the hardship that drove voters to the opposition.

“If Maduro’s discourse continues to be the same, the only way the results can change is by getting worse,” said economist Luis Vicente Leon.

On the streets, some Venezuelans were fed up with both sides.

“This just keeps getting worse. Now they’re going to deal with the problem even less because they’re fighting over the Assembly,” said Juan Molina, a 44-year-old security guard.

“I don’t know how this place is going to end up.”