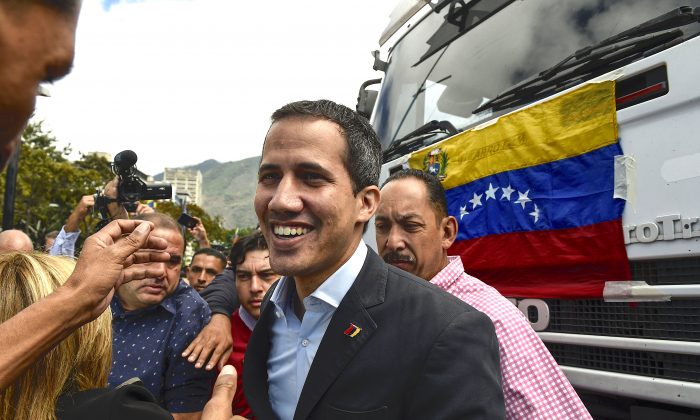 Interim President of Venezuela Juan Guaidó and some 80 lawmakers headed toward the Colombian border in a vehicle convoy on Feb. 21, hoping to receive humanitarian aid for their famished nation even as ousted socialist dictator Nicolás Maduro grounded air traffic and closed maritime and land border crossings.

Guaidó, recognized by more than 50 nations as the legitimate head of state, said he plans to bring in aid by land and sea on Feb. 23 to alleviate severe and widespread shortages of food and medicine. Guaido and the lawmakers from the National Assembly departed Caracas on the morning of Feb. 21 for the 500-mile trip to Cucuta, Colombia, a border town where tons of aid from the United States is piling up. Crowds formed along a major street in Caracas as Guaidó’s convoy departed. Venezuelans waived national flags and cheered in support.

Maduro ordered all of the aid to be blocked. The Venezuelan military, still obedient to the ousted dictator, placed shipping containers on the major vehicle bridge linking Colombia and Venezuela.

Guaidó’s move to receive the aid in person is likely to force the military stationed on the Cucuta border to choose their allegiance. Venezuelan military units deployed at other border portals will be forced to make a similar choice as convoys and boats loaded with tons of aid are expected to attempt deliveries at the border crossing with Brazil and the maritime crossing with Aruba, Curacao, and Bonaire.

On Feb. 19, the Brazilian government promised to deliver aid on trucks driven by Venezuelans organized by Guaido. Maduro ordered the land crossing with Brazil to be closed by 8 p.m. on Feb. 21, according to Efecto Cocuyo, an independent Venezuelan news outlet. On Feb. 20, Maduro ordered the closing of Venezuela’s maritime border with the Dutch Caribbean islands of Aruba, Curacao, and Bonaire after Curacao’s government said it would help store aid destined for Venezuela.

Maduro, who, together with his predecessor, Hugo Chávez, is responsible for the socialist policies that have devastated the once oil-rich nation, denies there is a crisis. In televised comments on Feb. 21, the dictator called Guaidó’s plans to bring in aid a cheap show to undermine his government.

“I don’t want to take any decision of this type, but I am evaluating it, a total closure of the border with Colombia,” Maduro said.

“Through this call for humanitarian aid, the population will benefit from the arrival of these goods to the Venezuelan border,” said legislator Edgar Zambrano, as he and other lawmakers waited to board buses in a plaza of eastern Caracas.

Guaidó’s ascendance and Trump’s swift affirmation of his legitimacy triggered a virtual global referendum of socialism and communism, with dozens free world nations, including the United States, Germany, and Australia, backing Guaidó, while a handful of current and former communist regimes, including China, North Korea, Cuba, and Russia, sided with Maduro.

It’s still unclear how Guaidó plans to bring in the aid. Opposition figures have suggested forming human chains across the Colombian border to pass aid packages from person to person and ships are also carrying aid from the Dutch Caribbean islands.

The United States has sent tons of aid to Colombia’s border with Venezuela, which Maduro has mocked as a “cheap show.” Maduro’s vice president, Delcy Rodriguez, has alleged the aid is poisonous and could lead to cancer.

Meanwhile, more aid was en route via land and sea. On Feb. 20, a boat carrying 250 tons of aid left Puerto Rico’s capital of San Juan and headed for Venezuela, the local government said in a statement. On Feb. 21, a plane carrying 50 tons of humanitarian aid provided by the Venezuelan community in the United States took off from Miami en route to Curacao, according to Guaidó.

“It is the hope of saving lives that inspires this immense movement,” Guaidó wrote on Twitter, adding a hashtag which roughly translates as “humanitarian avalanche.”

Trump said that Maduro is a puppet of the communist regime in Cuba and excoriated socialism and communism as deadly, failed ideologies. According to the congressional testimony of one former insider, more than 90,000 Cuban communist proxies run the government apparatus in Venezuela. Havana has also sent more than 20,000 security forces personnel to Venezuela in exchange for oil, according to Trump.

By an account from one source in Venezuela, the vast majority of the population backed Trump’s speech, with people even in party-line cities taking to the streets in response.

Venezuela is home to the world largest oil reserves and was a thriving nation before Maduro and his predecessor, Hugo Chávez, instituted a socialist regime that has decimated the nation’s economy. Almost 90 percent of Venezuela’s population live below the poverty line and more than half of families go hungry every day. More than 3 million people have fled the nation.