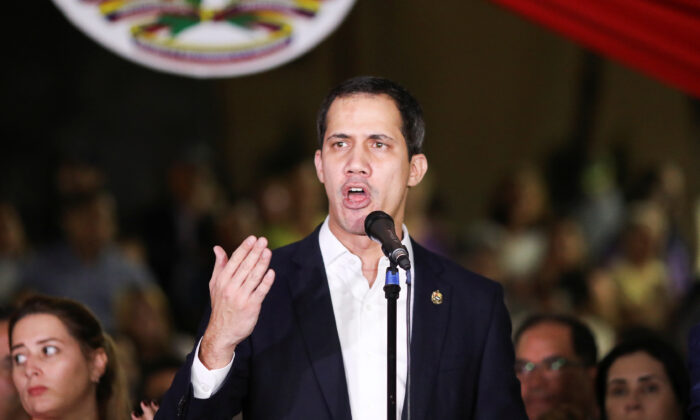 Venezuela's opposition leader Juan Guaidó, who many nations have recognized as the country's rightful interim ruler, speaks at a gathering in Caracas, Venezuela on Feb. 11, 2020. (Manaure Quintero/Reuters)
Americas

Days after Guaidó was received at the White House by President Donald Trump and visited the World Economic Forum in Davos, he was met by crowds of supporters as well as pro-Maduro agitators who shouted insults and hit his car with sticks and traffic cones.

Guaidó, who is recognized by more than 50 countries as Venezuela’s legitimate president, entered Venezuela via the main airport and was allowed back in without being arrested by officials despite a travel ban imposed by Maduro’s regime.

“Today more than ever we have to make our presence known,” Guaidó told a group of around 500 in a plaza in the Caracas opposition stronghold of Chacao. “This is not the time to go back. It’s time to move forward.”

“They don’t accept their destiny. They are alone, isolated, they represent no one,” Guaidó continued. “You [Maduro] won’t confront me or the people who want you gone for good.”

Guaidó hopes to revive the momentum of 2019 when he led a groundswell of protests against Maduro over human rights violations and a collapsed economy. However, he faces an increasingly weary population that in recent months has shown waning enthusiasm for more demonstrations. Many opposition sympathizers have become frustrated by Maduro’s continued grip on power, thanks to backing from the armed forces and support from China and Russia.

The ruling Socialist Party has repeatedly suggested Guaidó could be imprisoned for seeking international assistance to end Maduro’s rule. But the regime has never executed an arrest warrant, and Maduro appears willing to allow him to remain free.

Guaidó’s three-week tour to Colombia, Europe, Canada, and the Un ited States helped demonstrate to his supporters that he retains the backing of international players.

Trump during his State-of-the-Union address last week, which Guaidó attended, promised that “Maduro’s grip of tyranny will be smashed and broken.”

Maduro in a state television broadcast on Tuesday appeared to describe Guaidó as a “traitor” to the homeland.

“We don’t waste time on bozos,” he said, as he called on his supporters to “defend” Venezuela and “not get distracted by stupidities, by dummies, by traitors to the homeland.”