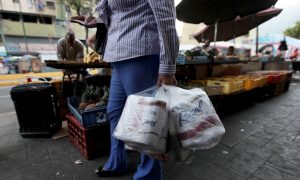 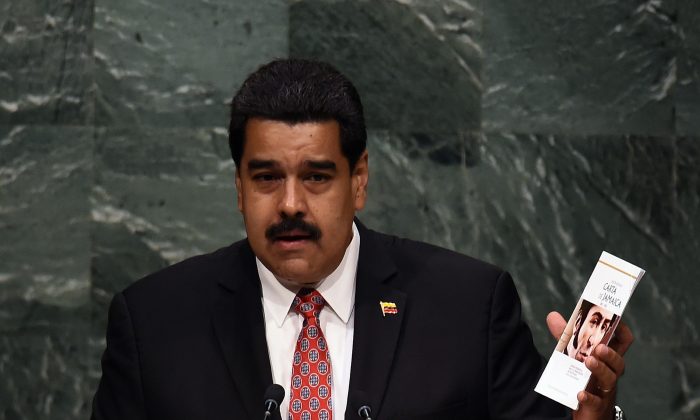 The effects of 21st century socialism in Venezuela are horrifying. According to the International Monetary Fund, Venezuela’s economy will shrink by at least 10 percent in the upcoming year.

Venezuela is suffering from the fastest inflation rate in the world with the rate reaching triple digits. Their currency, the bolivar, is practically worthless despite the exchange rate given by the Maduro government of 6.3 bolivars per dollar—which is practically a joke.

A more accurate exchange rate shows the bolivar pegged at 817.65 bolivars per dollar.

Venezuela is suffering from an economic recession that has become more acute recently and it is causing severe instability within the socialist nation.

Venezuela is suffering from an economic recession that has become more acute recently and it is causing severe instability within the socialist nation.

President Nicolás Maduro has attempted to deflect blame onto the low price of oil. In the past month, Maduro wrote to the Organization of the Petroleum Exporting Countries (OPEC) and non-OPEC members in an effort to stem the decline.

That however, has fallen on deaf ears.

Oil production is the bedrock upon which the entire Venezuelan economy rests. Unfortunately, years of government corruption and failed socialist economic policies transformed a once vibrant industry into an ailing one.

In a recent publication of the 2015 Index of Economic Freedom by The Heritage Foundation, Venezuela ranks at 176, third to last, just below Zimbabwe and above Cuba and North Korea. Economic freedom in Venezuela has sharply dropped after two decades of socialism.

According to the Index, “Private investment remains hampered by state interference in the economy, and hostility to foreign investment, coupled with threats of expropriation, persists.” The result of such a hostile business environment is the flight of foreign investment from the country.

In true fashion, the Maduro government has chosen to ignore salient facts surrounding the current economic recession and proceeded to lay the blame on others, especially political opponents.

According to Maduro himself, the latest round of street protests led to a battered economy. He has conveniently left out the fact that the government has created a heavily subsidized economy that was extremely dependent upon high oil prices for finance.

Or maybe the fact that the PDVSA, the state owned oil company, has had its coffers plundered by the ruling party to finance its political goals.

Sadly, Maduro and the PSUV, Venezuela’s ruling party, are not the ones suffering in this economic recession.

The Venezuelan people are the ones bearing the brunt of the recession that was largely due to government incompetence and mismanagement.

The Venezuelan people are the ones bearing the brunt of the recession that was largely due to government incompetence and mismanagement.

Supermarkets are devoid of basic necessities and acute food shortages are plaguing the populace.

A worthless currency has led to a sharp decrease in purchasing power and an increasing demand for the dollar. Finally, the lack of opportunities within the country has led to a migration of the middle class.

Once can only hope that the Maduro government will finally face reality and take action on Venezuela’s ongoing economic crisis.

Arlecchino Gomez is a member of the Young Leaders Program at The Heritage Foundation. Copyright The Daily Signal. This article was previously published on DailySignal.com