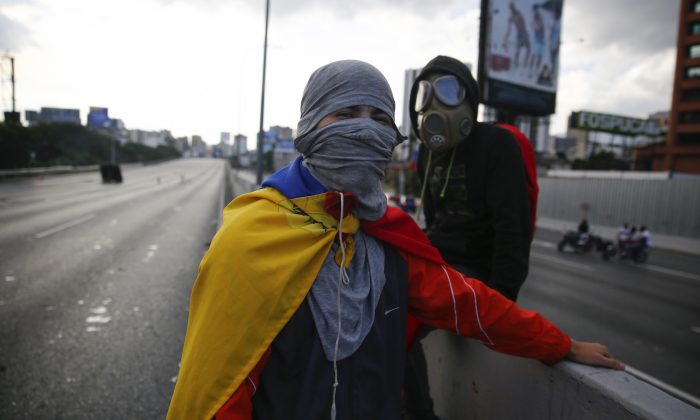 Demonstrators protest against the government of Nicolás Maduro in the main highway of Caracas on Feb. 2, 2019 in Caracas, Venezuela. (Marco Bello/Getty Images)
Politics

Venezuelans Warn Against Bringing Socialism to the United States

The crisis in Venezuela has prompted tens of thousands of people to take to the streets to protests against socialist leader Nicolas Maduro and against socialism, including in the United States.

During a recent rally at Washington, several Venezuelan victims of socialism have warned against the dangers of bringing socialism onto American soil.

“You do not ever want anything close to socialism,” one protestor told Campus Reform, a college news website.

“People are eating from trash cans in the streets, so how has socialism helped?” another protestor said. “Socialism is a big lie to people who are disadvantaged. It actually makes them worse off.”

The socialist South American country has been making headlines for past weeks after Maduro refused to step down over mounting international pressure. In mid-January, Venezuela’s duly elected National Assembly declared Maduro’s presidency illegitimate. The United States refuses to recognize him as the Venezuelan leader because of a fraudulent election, instead officially recognizing his opponent, Juan Guaidó, as the interim president. But Maduro has refused to give up control.

The standoff between the two has became a global referendum on socialism, with free-world nations including the United States, the UK, Germany, and Australia siding with Guaidó. In the meantime, socialist and communist regimes, such as China, North Korea, and Cuba, are backing Maduro. There are potential exclusions to the pattern, like Russia, which may be backing Maduro after having invested heavily in Venezuelan oil or as a way to oppose the United States on the global stage.

Venezuela has since spiraled into a deeper political chaos, exacerbated by its ruined economy.

Venezuelans across the country have filled the streets to demand Maduro step down. An exiled Venezuelan Supreme Court chairman, Justice Miguel Angel Martin, told The Epoch Times in a previous interview that Maduro is a “former president” and that the Venezuelan military should “fulfill their duty” and detain the dictator.

In America, protestors in Washington voiced solidarity with those at home.

“No Venezuelan can like socialism, because we’ve seen it put in place very well,” a protestor said, according to Campus Reform.

“We always talk about the Nazis … but nobody ever talks about the socialists or communism. It has killed more people than Nazis did,” he continued.

“I was born an raised in Venezuela. My parents are still in Venezuela. And I have seen the country basically deteriorate,” he added.

‘America Will Never Be a Socialist Country’

President Donald Trump has previously criticized socialist policies proposed by political opponents and in his recent State of the Union address rejected the encroachment of socialism on America.

Trump said in his address on Feb. 5 that “we are alarmed by new calls to adopt socialism in our country.”

“America was founded on liberty and independence—not government coercion, domination, and control. We are born free, and we will stay free,” Trump said.

He also condemned the brutality of Maduro’s regime, saying that his socialist policies drove what was once the wealthiest country in South America into “a state of abject poverty and despair.”

Previously on Jan. 24, he criticized a 70 percent tax rate for the wealthy—a proposal by Democratic Rep. Alexandria Ocasio-Cortez (D-N.Y.).

“You know, it’s interesting, I’ve been watching our opponents—our future opponents—talking about 70 percent,” Trump said at the time. “Number one, they can’t do it for 70 percent. It’s got to be probably twice that number. But, maybe more importantly, what happens is, you really have to study and take a look at what’s happened to Venezuela.”