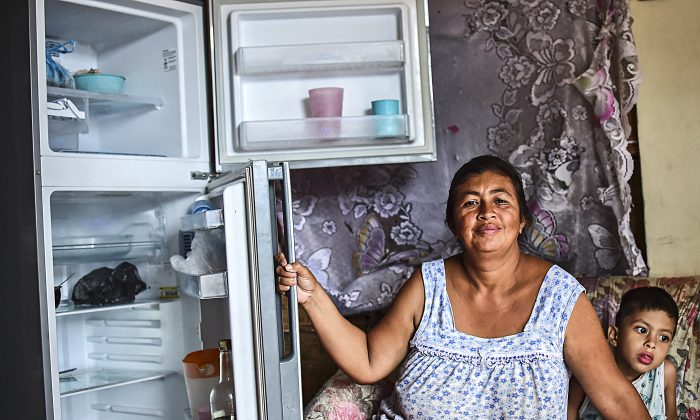 A woman shows her empty refrigerator at her home in Caracas, Venezuela, on June 2. Many Venezuelans are unable to buy enough food. (RONALDO SCHEMIDT/AFP/Getty Images)
Americas

Little to Celebrate This Season in Venezuela

CARACAS, Venezuela—Venezuelans celebrated Christmas in the aftermath of violent protests and looting that broke out in some parts of the country, following cash shortages.

The government’s decision to eliminate the largest denomination bill before the arrival of new, larger bills was the latest in a series of financial missteps in what is already a 3-year-long, crippling financial crisis.

President Nicolás Maduro has since backtracked, telling Venezuelans to continue using the 100-bolivar notes—worth a mere 4 U.S. cents on the black market—until Jan. 2.

But most Venezuelans had already been left cashless after a mad rush to deposit wads of soon-to-be-worthless bills in banks, with the promise that they would soon receive the new 500-, 2,000-, and 20,000-bolivar notes.

As 2016 draws to a close, Venezuelans look back on a year marked by food and medical shortages, as well as skyrocketing inflation and criminality, including violent kidnappings.

“The day to day is about survival. I feel like we don’t live,” said 36-year-old Adriana Arias.

“Over the past three years … all of the bad things that came from [former president] Chávez’s government increased with Maduro’s government,” said Arias. “These people [the government] sold a socialist idea where we could all be equal. They made us equal, by making us all poor.”

These people [the government] sold a socialist idea where we could all be equal. They made us equal, by making us all poor.
— Adriana Arias

Arias’s close friends are part of a mass brain drain that has seen many young Venezuelans search for a better quality of life abroad. Some estimates claim around 1.5 million people have left the country since Chavez came to power in 1999. Official statistics are not available.

After waiting on an expensive passport renewal that took three months to process and print, Arias is contemplating leaving the country too: “[It’s] more of an escape, a forced escape.”

The young yoga instructor, whose brother and cousin were murdered by street gangs, says fear is what will ultimately drive her out of the country.

“You wake up each day, leave your house, and you don’t know whether you’ll be back.”

What was once a vibrant nightlife has dwindled, as a self-imposed curfew sees much of Caracas, often rated as the most violent city in the world, empty after sundown.

“I had been optimistic and stubborn in not wanting to leave because I always thought this [situation] had to end at some point,” explained Arias.

But estimates by the International Monetary Fund predict that the country’s already staggering inflation will reach 1,660 percent in 2017, suggesting that there will be little solace for Venezuelans in the new year.

In Petare, Caracas’s biggest slum, 39-year-old Diana Guainet Sequera frets over how she will provide for her unborn and unplanned third child.

This year was the first time the mother-of-two had been unable to afford new clothes for her children for Christmas Day celebrations. Although both she and her husband have jobs, the money is spent entirely on food and the children’s schooling—there is no space for leisure anymore.

Simple weekend activities like taking her two children out for dinner or to the cinema have become impossible. Sequera, who makes a mere 3,000 bolivars a day—less than $1—used to supplement the family’s income by selling decorations and lights during the Christmas season.

“People are concerned with buying food, not clothes or anything else, only food. … This year, I sold nothing,” she said, sitting in her family living room.

Venezuela was once one of South America’s most successful economies. Now Venezuelans are flooding into Colombia for urgent medical care, and looting grocery stores.

“There never used to be this much need,” said Sequera. “Nowadays there are children eating from the trash, people stealing.”

As is the case with many Venezuelan households, there were no new Christmas decorations in the Cedeño family home this year either.

Maduro Just Crossed the Line—Is It Time the OAS Made Venezuela a ‘Pariah State’?

Far from the dangers of Petare, in the city of Valencia, the youngest family member, 30-year-old Andrea Cedeño, recalled past Christmases like bygone times.

“We always tried to invite people over and celebrate, with the family, but that no longer happens,” she said.

“I’ve no real Christmas spirit. … When you see people on the street without food to eat, it takes away any want to celebrate Christmas.”