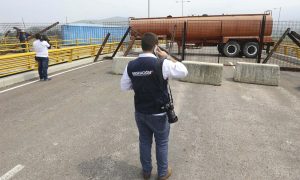 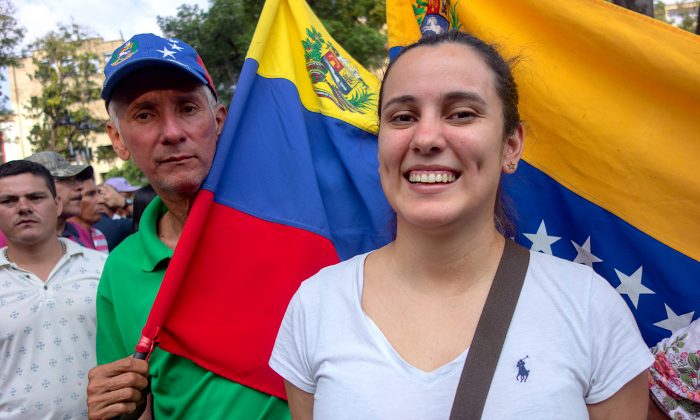 Jhuliana Hernandez smiles after crossing the border from Venezuela in Cúcuta, Colombia. (Luke Taylor for The Epoch Times)
Americas

BOGOTA, Colombia—Venezuelan refugees fleeing the socialist dictatorship of Nicolas Maduro into Cucuta, a humid border town, say they have been inspired by President Donald Trump’s address to the Venezuelan community that he gave in Miami on Feb. 18, fueling hope for change as the U.S. leader elevated their plight to the world stage.

More than three million Venezuelans have fled the poverty and famine in their homeland brought forth by years of socialist policies instituted by Maduro and his predecessor, Hugo Chavez. The exodus continues even as Maduro’s grip on the reins of the once oil-rich nation is facing its most significant challenge to date.

The National Assembly declared Maduro’s presidency illegitimate in January, with Juan Guaidó, the assembly leader, assuming interim presidency. President Donald Trump swiftly recognized Guaidó as the interim leader of the country as vast crowds flooded the streets of major Venezuelan cities in support of him.

In a speech to the Venezuelans in Miami, Trump reiterated his support for Guaidó, warning the Venezuelan military against backing Maduro, and excoriating socialism and communism as deadly, failed ideologies. Venezuelans’ fleeing the country via the border with Colombia told The Epoch Times that Trump’s speech is giving the nation hope.

“I feel hopeful because having the U.S. government support is very important to us, it helped us to be in the eye of the world,” said 30-year-old Jhuliana Hernandez. “Socialism needs to be eliminated from the Americas. I’m a Juan Guaidó supporter and I’m a supporter of democracy and freedom. I think corruption and socialism crippled Venezuela.”

Hernandez and the other refugees interviewed for this article crossed the border into Cúcuta, a Colombian border town which has borne the most strain due to migration from Venezuela. Every day, some 40,000 people cross the chaotic Simon Bolivar bridge, which connects Cúcuta with San Antonio, Venezuela.

“I feel my country now has hope, the speech reassured me because I now know that the United States is with us,” said Sharon Laleshka. “I do not think [what Trump said] was unwarranted criticism, I think it is the reality that my country is living. Socialism does not offer people progress, it makes them dependent and unproductive.”

“Every time Trump speaks about Venezuela we are relieved and more hopeful,” Laleshka added.

Most of those crossing the Simon Bolivar bridge come to buy basic goods such as eggs, flour, or toilet paper, which are unavailable on their side of the border. Some sell their bodies or hair to survive. Thousands continue on to other destinations in Colombia, where over a million Venezuelans now reside, or other places in Latin America, which house nearly three million Venezuelan migrants.

Venezuela is home to the world largest oil reserves and was a thriving nation before Chavez and Maduro instituted a socialist regime that has decimated the nation’s economy. Almost 90 percent of Venezuela’s population live below the poverty line and more than half of families are unable to meet their basic food needs, according to the Mercy Corps humanitarian group.

“It is disguised socialism or communism that is the culprit of the economic debacle that across my country, Venezuela,” said Ivan Dario, 36, another refugee. “There is no legal certainty to the capitalist entrepreneur. Entrepreneurs are the ones that generate jobs.”

Maduro and Chavez also opened the doors to communist infiltration from Cuba, with more than 90,000 communist proxies running the government apparatus in Venezuela. Havana also sent more 20,000 security forces personnel to Venezuela, according to the Trump administration.

In his Miami speech, Trump positioned Venezuela as the first domino that would trigger the fall of communism and socialism in South America, where the ideologies are widespread. Nicaragua and Cuba, the other nations in the so-called “troika of tyranny,” would follow suit once Venezuela is purged, Trump suggested.

“The twilight hour of socialism has arrived in our hemisphere and, frankly, in many many places around the world,” Trump said. “The days of socialism and communism are numbered not only in Venezuela but in Nicaragua and in Cuba as well.”

Inside Venezuela, support for Trump’s speech was overwhelming, according to accounts collected by a citizen interviewed by The Epoch Times.

“About 90 to 95 percent of Venezuela supported it, only that they didn’t dare to [go out to demonstrate] because of the suppression. It was extraordinary, something we’ve been awaiting for a long time,” the Venezuelan, speaking anonymously, said.

Since taking office, the president has made the fight against socialism and communism a major part of his agenda. At this year’s State of the Union speech, he said that “America will never become a socialist country.”

Trump has also lambasted communism and socialism on the world stage, telling the United Nations in September 2017 that “anguish and devastation and failure” followed wherever these ideologies were adopted. In November 2017, he told the National Assembly in South Korea that communism is to blame for the stark contrast between the desolation and famine in North Korea and peace and prosperity in South Korea.

Guaidó’s ascendance in Venezuela has triggered a global referendum on socialism and communism. Current and former communist regimes like China, North Korea, Cuba, and Russia have backed Maduro. More than 50 free-world nations—including the United States, Germany, and Australia—recognized Guaidó as the legitimate leader.

Trump delivered his speech as humanitarian aid from the United States idled on the border with Venezuela. Maduro has continued to refuse to allow the aid into the impoverished nation, with supplies piling up in Cúcuta. On Feb. 16, three U.S. military cargo planes landed in Cúcuta carrying 180 tons of humanitarian aid.

The heavily guarded warehouse in Cúcuta is one of three points from where an attempt will be made on Feb. 23 to deliver the aid into Venezuela. Guaidó hopes the attempt will drive a wedge between Maduro and military forces who continue to support him despite popular discontent. The United States has pledged $20 million to alleviate the suffering in Venezuela.

Maduro claims the decline of his country is a result of U.S.-imposed sanctions and that Venezuelans “are not beggars.” His regime placed an oil tanker and shipping crates on Feb. 6 to barricade a bridge that was intended to be used to deliver the aid.

Trump warned Venezuelan military officials that they stand to lose everything if they continue to back Maduro. The United States is aware of the wealth hidden abroad by military officials and their families, including their whereabouts, Trump said.

“If you choose this path,” Trump warned them, “you will find no safe harbor, no easy exit, and no way out. You will lose everything.”