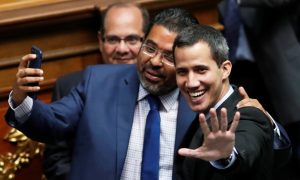 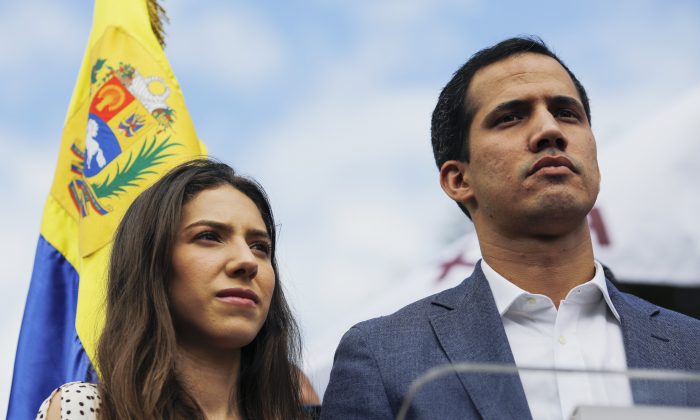 Opposition leader of Venezuela Juan Guaidó delivers a speech next to his wife Fabiana Rosales during a demonstration on January 26, 2019 in Caracas, Venezuela. (Marco Bello/Getty Images)
Viewpoints

Venezuelans Can End Their Tyranny

Venezuela has long played an important democratic role in the Americas, including becoming the first Latin American nation to end military rule in 1958.

However, as Nicolás Maduro was sworn in for his second term as president on Jan. 10, the country was experiencing a humanitarian catastrophe.

Although one of the hemisphere’s most oil-rich countries, Venezuela’s GDP has fallen by almost half since 2013. Millions lack food, access to doctors, medicine, running water, and electricity, while three million people—a tenth of the population—have already fled the country.

In 2017, more than 100 protesters were killed, mostly by soldiers loyal to Maduro’s regime after he suspended the nation’s hard-won constitutional order, and more than 1,000 have been arrested in recent days.

BBC television recently highlighted empty shelves in Caracas grocery stores and quoted a teacher saying that her monthly salary allows her to buy only three Cokes. Maduro’s economic mismanagement has created hyperinflation, running at more than a million percent yearly; unemployment is expected to reach 40 percent by the end of 2019.

Transparency International ranks Venezuela as the worst performer in the Americas on its Corruption Perception Index this year, with a score of 18 out of a possible 100, reflecting “systematic and persistent corruption.”

The Economist termed the presidential election last May “an up-and-down fraud.” Regardless, Maduro continues to repress the elected opposition, using money from oil exports to pay off the armed forces for their ongoing support.

Virtually all democracies in the hemisphere oppose Maduro. Canada’s former ambassador to Venezuela, Ben Rowswell, recently wrote, “Even if Russian and Chinese intervention in Venezuela keep [Maduro] in power a while longer, history will remember how profoundly his fellow citizens and the majority of Latin America have denounced him.

“When democracy returns, Venezuelans will remember the countries that stood by them when the chips were down.”

Oil production in Venezuela has recently dropped severely after years of mismanagement, creating a circle of falling output and revenue. In desperation, Maduro’s government in 2018 began to sell off Venezuela’s gold reserves of about 132 tonnes.

Founded in 2017, the Lima Group of 14 democracies from across the hemisphere, but not including the United States, worked with the National Assembly of Venezuela as the last legitimately elected body to restore democracy in Caracas.

On Jan. 23, the group ensured wide acceptance throughout Latin America of Juan Guaidó, 35, as interim president. He had earlier been sworn in as president of a fairly elected national assembly.

This week, Canada’s foreign affairs minister, Chrystia Freeland, hosted a meeting in Ottawa of the Lima Group members to seek a peaceful solution to the intensifying crisis.

She stressed: “Lima Group members [will] discuss the next steps to support Mr. Guaidó and the people of Venezuela.”

She also mentioned initiatives to provide more humanitarian aid to Venezuelans and for refugees fleeing to neighboring Colombia and Brazil.

Freeland called on Maduro to respect the “the sovereignty of the Venezuelan people.”

“Sovereignty rests with the citizens of the country, not with the government,” she said. “The initiative for restoring democracy must come from the people.”

Irwin Cotler, a former Canadian justice minister who sits on the OAS panel investigating crimes against humanity in Venezuela, thinks the Lima Group should pressure the Venezuelan military to support Guaidó.

“It is possible for the community of democracies to leverage the referral to the ICC [International Criminal Court] to put the military leadership on notice that they can be held accountable for their crimes should they continue to support Maduro.”

For the first time since being elected in 2013, Maduro faces a single opposition leader in Guaidó with wide public support.

Guaidó declared himself interim leader last week, pending a legitimate new presidential election. The public demonstration on Feb. 2 for him in Caracas was reportedly one of the largest in Venezuela’s history.

Until recent days, the end of the Maduro regime was only a distant dream for many. Today, democracy, the rule of law, and human dignity might well return quickly, but the Ottawa meeting this week should probably limit expectations if Venezuela’s role as a democratic leader in the Americas is to be restored. Amnesty for the military and other reconciliatory offers are no doubt going to be necessary.

David Kilgour
Human Right Advocate and Nobel Peace Prize Nominee
David Kilgour, J.D., former Canadian Secretary of State for Asia-Pacific, senior member of the Canadian Parliament and nominee for the Nobel Peace Prize for his work related to the investigation of forced organ harvesting crimes against Falun Gong practitioners in China, He was a Crowne Prosecutor and longtime expert commentator of the CCP's persecution of Falun Gong and human rights issues in Africa. He co-authored Bloody Harvest: Killed for Their Organs and La Mission au Rwanda.
TOP NEWS