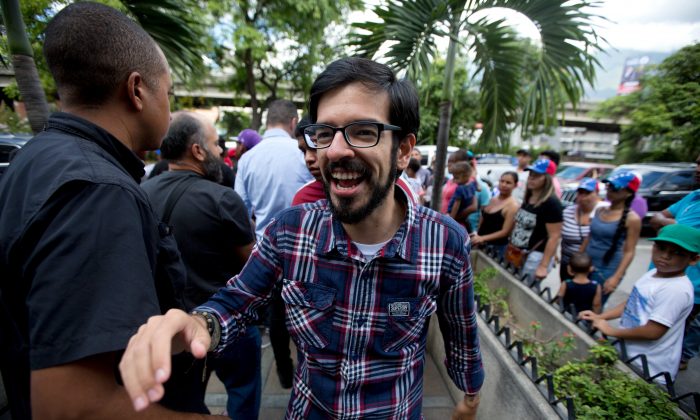 Opposition lawmaker Miguel Pizarro, who was reelected to Congress, greets supporters as he arrives for a news conference in Caracas, Venezuela, Monday, Dec. 7, 2015. Venezuela's opposition won control of the National Assembly by a landslide in Sunday's election, stunning the ruling party and altering the balance of power 17 years after the late Hugo Chavez was elected president. (AP Photo/Fernando Llano)
Americas

CARACAS, Venezuela—Venezuela’s opposition, still rejoicing from its shock triumph in legislative elections, is now waiting anxiously for the final tally to see whether it secured a two-thirds supermajority that could dramatically wrest power from President Nicolas Maduro after 17 years of socialist rule.

The Democratic Unity opposition alliance declared Monday that it won the minimum number of seats needed to initiate a process to remove Maduro. But despite the efficiency and transparency promised by the country’s electronic voting system, the National Electoral Council has yet to announce the results of 22 undecided races almost a full day after polls closed.

The opposition coalition won at least 99 seats in the incoming 167-seat legislature, electoral authorities announced after midnight Sunday, setting off a cacophony of car honks and fireworks in the capital’s wealthier eastern neighborhoods. The ruling Socialist party and its allies won 46 seats.

The opposition coalition needs 13 of the 22 undecided races to give it the supermajority needed to sack Supreme Court justices, initiate a referendum to revoke Maduro’s mandate and even convoke an assembly to rewrite Hugo Chavez’s 1999 constitution.

U.S. Secretary of State John Kerry congratulated Venezuelans for making their voice heard and called on authorities to tabulate and publish remaining results in a timely manner.

“Dialogue among all parties in Venezuela is necessary to address the social and economic challenges facing the country, and the United States stands ready to support such a dialogue together with others in the international community,” Kerry said in a statement.

Even if the opposition falls short, the landslide could unleash intense political battles. Since the late Chavez swept into power, the opposition has never held a branch of government.

Both sides are more accustomed to hurling insults than negotiating across the country’s vast political divide, and a protracted power struggle could rip apart an economic and social fabric already in tatters.

Maduro urged his supporters to accept Sunday’s results, even as he recalled the long history of US-supported coups in Latin America and blamed the “circumstantial” loss on a right-wing “counterrevolution” trying to sabotage Venezuela’s oil-dependent economy and destabilize the government.

“I can say today that the economic war has triumphed,” said Maduro, who was surrounded by top socialist leaders in the presidential palace as he mostly pulled phrases from the stump speech he had been delivering before the election.

Hardliners in the opposition seemed similarly entrenched, preferring to talk about ending Maduro’s rule before his term ends in 2019 rather than resolving Venezuela’s triple-digit inflation, plunging currency and the widespread shortages expected to worsen in January as businesses close for the summer vacation.

Some opposition figures caution that the result has more to do with anger at Venezuela’s woes than an embrace of the opposition. While even moderates pledged to use their new leverage to pass an amnesty for opponents jailed during last year’s protests, putting food on the table is the priority for most Venezuelans.

“The opposition needs to accept this with a lot of humility,” said political consultant Francisco Marquez, who managed one of the winning opposition campaigns. “This was a punishment vote and we will need to show people that we’re up to the task.”

Voting Sunday was mostly peaceful, though several ruling party governors, including Chavez’s brother Adan, were videotaped braving boos and insults as they entered polling centers. Turnout was a stunning 74 percent, the highest for a parliamentary election since Chavez ended compulsory voting in the 1990s.

The scale of the political earthquake was such that socialists lost even in Chavez’s home state of Barinas, where Adan Chavez is one of several family members holding high office. In the capital, the opposition won by almost 20 percentage points, even prevailing in the emblematic 23rd of January slum where a mausoleum holds the remains of Chavez, who is revered by the poor as their “invincible commander.”

It was also a major blow to Latin America’s left, which gained power in the wake of Chavez’s ascent but has struggled more recently in the face of a region-wide economic slowdown and voter fatigue in some countries with rampant corruption.

Last month, Argentines rejected the chosen successor of President Cristina Fernandez, herself a close Chavez ally, turning instead to the relatively conservative mayor of Buenos Aires. And In Brazil, President Dilma Rousseff is battling impeachment over a corruption scandal in her long-ruling Workers’ Party.

Maduro had repeatedly vowed to defend Chavez’s legacy in the streets if his party lost, but he softened his tone in his initial post-election comments.

Reining in Maduro, who became president after Chavez died in 2013, will be tough. He still has a near-complete grip on all other branches of government and state insititutions, and may be able to outflank a hostile congress when it convenes next month.

However, Maduro also faces the challenge of maintaining the loyalty of different factions of the Chavismo movement, including the military, Venezuela’s traditional arbiter of political disputes.

In a cryptic address late Sunday night before results were announced, Defense Minister Gen. Vladimir Padrino, standing with the top military command, congratulated Venezuelans for doing their civic duty peacefully, but made no statements in support of the Maduro government, which has been common under Chavez.

“We’re in unchartered territory,” said David Smilde, an analyst for the Washington Office of Latin America who has lived and worked in Venezuela for much of the past 20 years. “Never under Chavismo have we seen a divided government.”