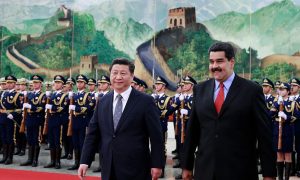 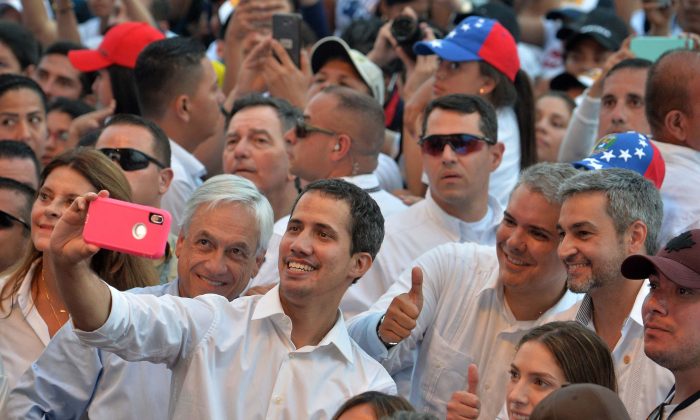 CUCUTA, Colombia—Thousands attending a concert to raise money for Venezuela’s humanitarian crisis at the Colombian border on Feb. 22 were surprised by the appearance of Juan Guaidó, the leader of the opposition who is currently facing off against Venezuelan regime leader Nicolas Maduro over control of the country.

Crowds let out confused murmurs and then cheers of elation when it was revealed that the fresh-faced lawyer had made his way across the border, the logistics of his trip having been kept top secret in order to prevent Maduro from enforcing the travel ban he imposed on him in late January.

The concert was headlined by big name artists from across the continent and the world such as Spanish singer/songwriter Alejandro Sanz and Colombian reggaeton star Maluma. Also in attendance were the Colombian, Chilean, and Paraguayan presidents, and the United States special representative to Venezuela, Elliott Abrams.

The initiative was launched by British billionaire Richard Branson to raise $100 million to help alleviate suffering in Venezuela and to add pressure on Maduro to open up the way for aid into the country.

Branson told the thousands who had gathered under the beating sun to enjoy music and call for political change, and that any alleged political affiliations were a necessary price for ending suffering.

“We haven’t wanted to get involved in politics but humanity also means treating people well,” he said to a confused crowed before a translator got to work. Branson added that coverage of the concert is censored inside Venezuela, including on social media sites and YouTube.

Guiadó’s appearance came after the sun began to set and the music wound down on the eve of the looming aid showdown at the Colombian-Venezuelan border.

On Feb. 23, the opposition will try to mobilize Venezuelan volunteers dressed in white to carry aid into Venezuela against Maduro’s wishes. Tensions are growing in the humid border town of Cúcuta as confrontation looks increasingly likely. On Feb. 22, reports emerged that two were left dead and over a dozen people injured at the Brazilian-Venezuelan border as the military opened fire on civilians who attempted to prevent a convoy from blocking the path of aid into the country.

The opposition hopes the aid will drive a wedge between the military—which continues to back Maduro despite little popular support—and Maduro by forcing an order that they cannot follow: deny people food and medicine they desperately need and risk violence against civilians.

On Feb. 15, the Venezuelan military defiantly blocked off the Tienditas bridge where the aid was being stored with shipping crates and an oil tanker. By Feb. 22 the makeshift blockades had been reinforced by the military who welded them to the bridge. Two concerts took place on that bridge on the same day in a musical duel over the nation’s future: Branson’s Live Aid-esque event on one side pulling thousands of Venezuelans dressed in their nation’s colors and draped in flags, and a Chavista Hands Off Venezuela concert on the other which drew hundreds, many of them military officials.

As the musical propaganda war played out, Maduro sent Venezuelan missiles and increased military presence at the border.

Hours after the concert had wound down, Maduro’s vice president, Delcy Rodriguez, announced that major border crosses with Colombia would be closed temporarily as they are “serious and illegal threats” against the “peace and sovereignty” of Venezuela.

Maduro has consistently denounced the US-backed aid initiative, calling it a “Trojan horse” for invasion, and said that there is no humanitarian crisis in Venezuela. The country currently faces widespread food and medicine shortages and hyperinflation of over one million percent which makes even the most basic goods unattainable. Over three million Venezuelans have fled the crisis since it began, many residing in Colombia where the Feb. 22 concert was held.

Despite the obstacles in place and fear of becoming fired upon by the Venezuelan National Guard, many in attendance at the concert were hopeful the power of the people would break the impasse on Feb. 23 when they were called upon by their new leader, Guiadó.

“Now there is no fear left, they can say they can kill us, but they are already killing us in Venezuela,” said Josué Briceny, 21, who was preparing to get a rough night’s rest at a local camp where some concert attendees will stay before attempting to head back across the border with the aid the following morning. “If you realized the level of suffering in Venezuela you would realize why the risks no longer matter. We have to make it happen.”