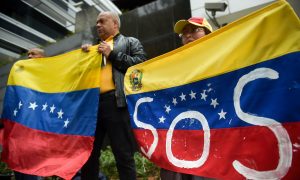 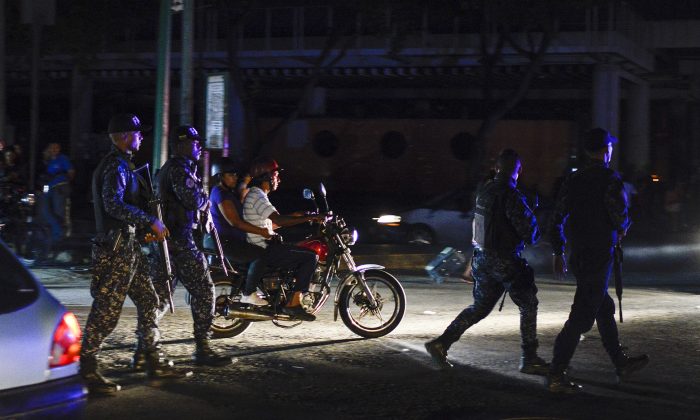 Soldiers and passersby walk in the Petare neighbourhood after Caracas and other parts of Venezuela were hit by a massive power cut on July 22, 2019. (Matias Delacroix/AFP/Getty Images)
Americas

BOGOTA, Colombia—Millions of Venezuelans were once again plunged into darkness this week due to nationwide blackouts, the latest reminder of the depths of their country’s prolonged economic and political crisis. The Venezuelan regime maintains that the national grid is being sabotaged, but experts say rampant corruption and mismanagement is causing the power failures.

Lights went out in Caracas at 4 p.m. on the afternoon of July 22, the first time the capital had been hit since March of this year. The subway grounded to a halt, water taps went dry, and key military bases fell into darkness as emergency lighting failed. State TV channels, usually a reliable 24-hour mouthpiece for Nicolás Maduro’s regime, were also off air, agencies reported.

Authorities were quick to come up with comments, with communications and information minister Jorge Rodriguez declaring on television three hours later that hydroelectric dams in the south of the country had been hit by an “electromagnetic attack.”

In an official press release, the government said due to previous “acts of sabotage,” it was ready to deal with the situation “in the shortest time possible.”

Maduro has accused the United States of orchestrating a week-long blackout which wrought chaos back in March.

Experts on the country’s energy sector, however, allege the government’s announcement is another excuse for their own incompetence and corruption.

“This is a repeat strategy and it’s totally non-credible,” said José Aguilar, a U.S.-based energy consultant and power expert. “Something happens and it’s always the fault of someone else, ‘the evil empire of the United States’, but they show no proof, they justify the unjustifiable.”

Aguilar said that although the Maduro regime tries to keep tight-lipped on the state of electrical infrastructure—not releasing information on the national grid for nearly nine years—information continues to slip out, showing a lack of resources, management, and qualified staff to deal with the escalating crisis.

As fossil fuel plants have failed, stress on the hydroelectric system—which now powers around 80 percent electrical energy—has been increased to unsustainable levels to compensate, and that means future failures are “likely to reoccur,” Aguilar said.

Freddy Brito, the country’s energy minister, announced on Tuesday morning that power had been restored in Caracas, as well as in five states. Some Caracas-residents, however, continued to report outages this week. Others complained that outside the capital—where the government concentrates its efforts—power outages have become a daily occurrence.

“They talk about a ‘third national blackout’ but since the first was registered on March 7 of this year, in Barquisimeto we have power outages of up to 12 hours, every day,” lamented Vanessa Ovalles, a 27-year-old pastry chef who said she is often unable to work in her city in northwestern Venezuela due to gas and water shortages created by the blackouts.

Alongside the power failures, Venezuela’s political and economic crisis under Maduro has meant shortages of basic goods and foods are widespread, and where available, often unaffordable due to hyperinflation which could reach ten million percent this year, according to the International Monetary Fund. At least 4 million—more than ten percent of the population—have fled the country according to the United Nations refugee agency.

Juan Guaidó, the opposition’s new, fresh-faced leader who aims to remove Maduro from power and swore himself in as interim president in January, has so far not been able to topple Maduro’s regime. Guaidó is recognized by over fifty nations, including the United States, as Venezuela’s legitimate leader.

Guaidó, who is leader of the nation’s opposition-controlled congress, hoped to capitalize on the new wave of public discontent caused by the outages to rally support.

“They tried to hide the tragedy by rationing throughout the country, but the failure is clear. … Venezuelans won’t grow accustomed to this disaster,” he tweeted.