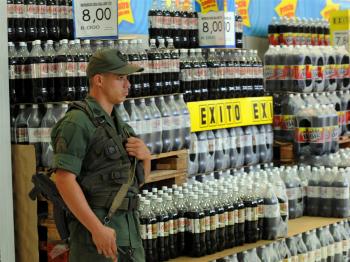 A member of the Venezuelan National Guard stands guard in one of the aisles at a supermarket on January 11, 2010 in Caracas. (Juan Barreto/AFP/Getty Images)
Business & Economy

Venezuela Devalues Its Currency by 50 Percent

Ilya Rzhevskiy
View profile
Follow
biggersmaller
Print
Last week, Venezuelan President Hugo Chavez announced that its local currency, the bolivar, will be devaluated at a rate of 50 percent against the U.S. dollar.

For Venezuelans it would mean that imported goods would double in price, eroding the nation’s purchasing power by 50 percent. For importers, it would mean that their products would all of the sudden become too expensive for many locals to buy, putting any business relationships with Venezuela in jeopardy.

“We see no light on the horizon in terms of trade with Venezuela. Our exports were already being impacted. Now, on top of that, they’re about to become super expensive,” commented Tulio Zuluaga, the head of Colombia’s Asopartes automotive export group, in a statement.

“By establishing the exchange rate at 4.3 bolivars per dollar, the quality of life for Venezuelans is automatically devalued since we now have half the money we had before," Chavez’s political opponent Antonio Ledezma, who is the mayor of Caracas, told reporters.

In addition to the dual exchange rates, there is also a third one used on the black market, which is about 6.25 Bolivars per dollar. Due to the fact that Venezuela restricts access to dollars, issuing them only to few select entities, many importing companies and individuals have been left suffering and unable to do business in Venezuela. This gave rise to a black currency market with an unofficial exchange rate.

“Companies had frozen their activities because they couldn’t buy dollars at the official rate,” said Pedro Palma, an economics professor at IESA Business School in Caracas.

Historically, dual exchange rates have been used by corrupt officials who could choose which businesses would get preferential rate and by importers who would be prone to falsifying import invoices to get the most out of the dual exchange rates.

In terms of advantages, the weaker bolivar would provide some short term spending boost to Chavez as there would simply be more money to spend.

“Devaluation will give a boost to the productive economy, will stop imports that are not strictly necessary and will stimulate exports,” Hugo Chavez said, according to the Wall Street Journal.

Analysts believe that a weaker bolivar would induce a high inflation rate that would quickly make the currency even weaker.

Additionally, due to the low exchange rate for products such as food, medicine and machinery, the imports on these would be relatively cheap. As a result, it would detriment any local efforts to develop these basic industries, as it would be a lot cheaper to import them from the neighbors rather than to produce them from within Venezuela, thus creating a strong external dependency on life’s necessities.

Fearing inflation, many Venezuelans have stormed the shops and malls selling imported goods and literally left the shelves empty.

As a response, Chavez has made strong statements on his weekly television show.

"Right now, there is absolutely no reason for anybody to be raising prices of absolutely anything. I want the National Guard on the streets with the people to fight against speculation," he said accompanied by a loud applause. "Publicly denounce the speculator and we will intervene in any business of any size."

Whether these bold moves by Chavez would bring any long-term benefit to Venezuela is doubtful. Analysts predict that this intervention would instill fear and consequently withdraw investors completely and make the locals even poorer than before.