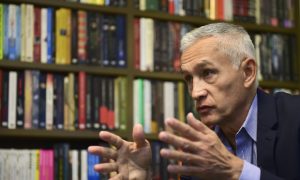 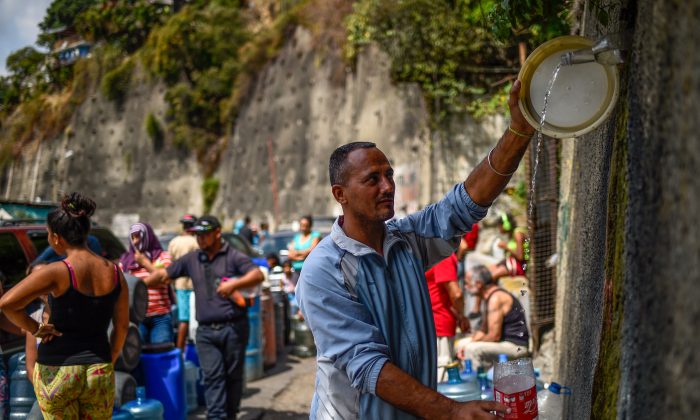 A man fills containers with water flowing down from the Wuaraira Repano mountain, also called "El Avila", in Caracas on March 13, 2019. Millions in Venezuela have been left without running water.(Federico Parra/AFP/Getty Images)
Americas

BOGOTA, Colombia—Blackouts across Venezuela appear to have been partially resolved—for now—as power finally returns to homes, hospitals, and schools across the country; but a week of intermittent darkness has made daily life harder than ever in the crisis-stricken nation.

Venezuela has faced a serious economic, social, and political crisis due to a crash in oil prices, poor economic management, and rampant corruption for years, but the outages which have plagued 22 of 23 states since March 7 have brought daily adversity and suffering to new depths.

Lack of refrigeration meant food and essential medicines quickly spoiled in the tropical climate, while the metro system, schools, and businesses across the nation were shut down. Hospitals, already at breaking point due to equipment, medicine, and staff shortages, faced an unprecedented challenge as backup generators failed, rendering lifesaving equipment useless.

The Venezuelan opposition, who are vying to oust Venezuelan regime leader Nicolas Maduro, allege that 26 people lost their lives as a result of the power outages.

Maduro has blamed the latest crisis on the opposition, local journalists, and the United States.

Although power has largely returned, water shortages persist, forcing some residents in the capital Caracas to fill up containers from polluted streams running adjacent to major highways.

The metro system has reopened but remains crippled, leaving waiting lines snaking around the block. The situation is similar at gasoline stations where shortages remain, and in local supermarkets, where U.S. dollars have become the de facto currency due to cash shortages and the failure of electronic payment systems.

Some businesses remain closed following the ransacking of local stores as desperation took hold: More than 500 businesses were damaged, which caused more than $50 million worth of damage in the city of Maracaibo, according to Fergus Walshe, president of the city’s Chamber of Commerce.

Maduro has announced a commission to investigate the cause of the outages which he says was a “cyber attack” organized by the United States. Local journalist and activist, Luis Carlos Diaz, was detained by intelligence services and charged on March 12 with taking part in the alleged sabotage plot, sparking protests outside the district attorney’s office.

U.S. officials and international power consultants have denied the possibility of foreign meddling in the heavily guarded electrical grid via the internet.

“The collapse of Venezuela’s electrical grid and public services is due to years of Maduro’s corruption, a refusal to invest in the public sector, and neglect of maintenance. It’s simple: machinery breaks down when you steal all the money intended to buy parts to keep it running,” U.S. National Security Adviser John Bolton wrote on Twitter.

Alleged state incompetence and growing public discontent were expected to fuel the cause of Juan Guaidó, the opposition leader who invoked the constitution to declare himself president on Jan. 23 and seeks to oust Maduro.

But as the country’s power stations stalled, so did the opposition’s momentum. Marches led by Guaidó on March 12 failed to draw the usual number of enthused protesters who consistently answer the calls of the fresh-faced leader.

“Amid the blackout, it is very hard for the opposition to mobilize,” said Phil Gunson, a Caracas-based senior analyst at International Crisis Group.

At the height of the outages, 96 percent of the country lacked internet access, meaning Twitter and WhatsApp—the opposition’s essential line of communication in a country with ever-declining press freedom—fell strangely quiet.

“There is a sense that the initial plan has not worked, that this is a longer-term problem and it is not clear where [the opposition] go from here,” said Gunson.

“The government narrative about a supposed cyberattack seeks to regain control of the narrative and there are hints Guaidó might even be arrested, as the government feels it has seen off the initial offensive and may be strong enough to defy its adversaries,” Gunson added.