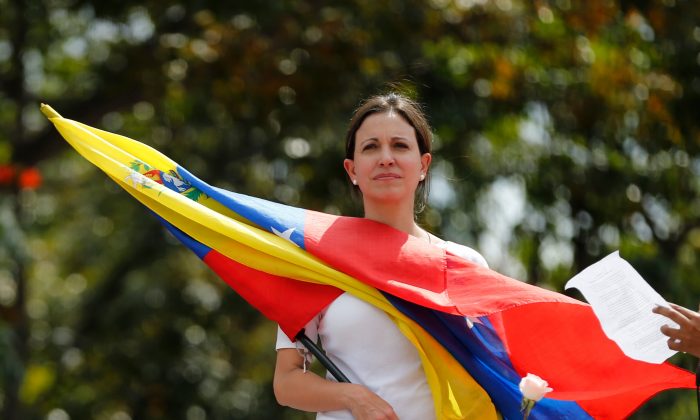 Opposition leader and Congresswoman Maria Corina Machado holds a Venezuelan flag during a women's protest outside the Bolivarian National Guard headquarters in Caracas, Venezuela, on Feb. 26, 2014. The outspoken leader of Venezuela’s opposition is being charged, Nov. 26, 2014, in what the government alleges was a US-backed plot to assassinate President Nicolas Maduro. (AP Photo/Fernando Llano)
Americas

CARACAS, Venezuela—An outspoken leader of Venezuela’s opposition is being charged in what the government alleges was a U.S.-backed plot to assassinate President Nicolas Maduro.

What little is known about the alleged plot was presented in a highly publicized news conference in May following months of deadly anti-government protests. At the time officials presented what they said were conspiratorial emails between Machado, other prominent hardliners and State Department officials, including Kevin Whitaker, the current U.S. ambassador to Colombia, discussing funding and instruction for a plot to topple Maduro’s socialist government.

Arrest orders for three others implicated in the purported plot, all of them living abroad, were issued in June. A cybersecurity forensics firm hired by one of the accused to clear his name determined the communications were fake.

Machado was barred in June from leaving Venezuela just before being questioned in the case. She denies any wrongdoing and said on Twitter that the charges are an attempt to silence her and others pushing for Maduro to step down amid a grueling economic crisis marked by the world’s fastest inflation and widespread shortages.

Earlier Wednesday, she presented a petition demanding the resignation of four government-aligned members of the National Electoral Council, which she accuses of gutting the public’s faith in the country’s voting system.

Machado is one of Maduro’s fiercest adversaries and a divisive figure even within the Venezuelan opposition for having called for mass street protests in February, just two months after the government prevailed in mayoral elections. After traveling to Washington in March to denounce Maduro’s government at the Organization of American States, she was stripped of her seat in the National Assembly for allegedly committing treason.