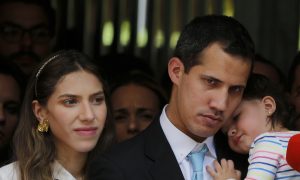 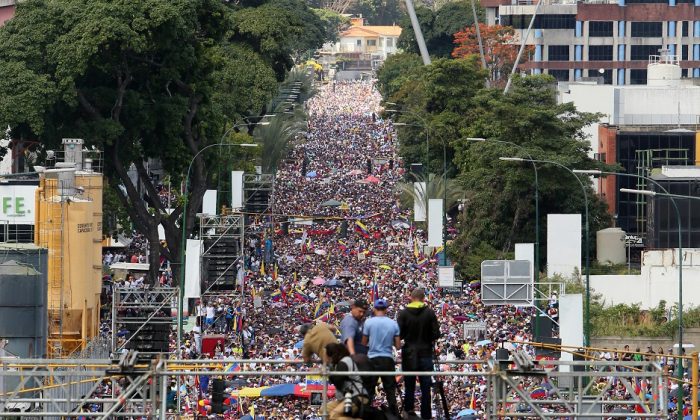 Demonstrators protest against the government of Nicolás Maduro in the streets of Caracas, Venezuela on Feb. 2, 2019. (Edilzon Gamez/Getty Images)
Viewpoints

Venezuela: Can Democracy Be Salvaged?

The United States, South America, and the rest of the globe face acceleration of a “slow-motion train wreck” into a full-blown, off-the-rails catastrophe in Venezuela.

We watched with rather abstract “tut-tutting” as former populist dictator Hugo Chavez increasingly undermined Venezuela’s democracy and economy while embracing free-spending socialism, coupled with an implacable hostility to the United States. His death in 2013 prompted the elevation of his puppet subordinate, Nicolas Maduro, who lacks Chavez’s charisma, populist touch, manipulative bureaucratic skill, and oil-derived economic sufficiency.

Under Maduro, the economy’s downward spiral accelerated. “Bolivarianismo”—Maduro’s version of socialist, nationalist anti-Americanism—worked poorly with collapsing oil prices and attitude changes by neighboring countries such as Colombia and Brazil, prompted by swarms of Venezuelan refugees (10 percent of the population has fled the country).

A country of pleasant “middle-class” existence has become one of privation, verging on starvation for some, with Maduro’s support base steadily narrowing.

This “almost too clever by half” legal maneuvering has netted Guaido recognition as president by a phalanx of Latin American and European states, as well as the United States and Canada. In response, Maduro’s tame justice system froze Guaido’s personal financial accounts and barred him from leaving Venezuela.

The result is a regime increasingly dependent on force and violence to retain power, having driven a significant portion of the upper-middle class out of the country into exile or opposition.

The massive anti-government demonstrations Feb. 3–4 weren’t effectively countered by pro-Maduro crowds. Venezuelans showed they were not cowed and ratcheted up the pressure on Maduro, who disingenuously called for legislative (but not presidential) elections.

More of the Same: The United States and allies in South America, Europe, and elsewhere will continue to pressure Maduro financially and politically. These aren’t trivial sanctions: Economic limitations on Venezuelan oil revenues, vigorous support for and recognition of Guaido, and international demand that Maduro call new elections (or face unspecified consequences) erode Maduro’s grip on power. However, such moves hardly guarantee that the preferred outcome will eventuate. Hortatory speech depends on a willing listener.

Hope Maduro’s Support Will Implode: The option, essentially, is to encourage the Venezuelan military and security establishments to look hard at their options, accept opposition promises of post-crisis pardons or impunity, decide Maduro is a losing bet, and toss him under the bus.

But such an approach also is far from assured. We have bet in the past that a military establishment would turn on its leadership and have been proved wrong. Think about Saddam Hussein’s ability post-Desert Storm to retain control of power. Think about the blithe belief that Syria’s military would consign Assad to luxury villas in southern France, but instead, it fought for him and suppressed disorganized armed opposition. Think about Egyptian armed forces under Abdel el-Sissi upending a terrifying Islamic government and restoring a tough, thinly veiled dictatorship.

It often doesn’t take much terror—public killings, torture, or arrests-in-the-night “disappearances”—to cow a population with something still to lose rather than die for democratic abstractions. Moreover, one must note the ethnic divide with light-skinned protestors countering security forces of a darker hue.

If Venezuela is now a “narco-state,” as some contend, the military may believe it will profit more from continued repression than the resumption of democratic norms. And it may be skeptical about amnesty’s duration given the righteous hunt down, years after guaranteed amnesty, for Argentinian officials guilty of unspeakable crimes.

Military Intervention: We may have telegraphed such with media hyperbole over a note by national security adviser John Bolton saying “5,000 troops to Colombia,” generating hissy fits by inter alia by Maduro, Moscow, Bernie Sanders, and purblind Canadian leftists. But “twice shy” after a feckless anti-Saddam “weapons of mass destruction” Iraq invasion, the Marines aren’t Washington’s first choice. It takes time to assemble a “willing coalition” of Latin military to join a USG intervention.

Thus, for the interim, better to “jaw-jaw” and hope Maduro’s intestinal fortitude fails—or that his troops refuse to fire on the citizens, and he opts for a dacha outside Moscow.