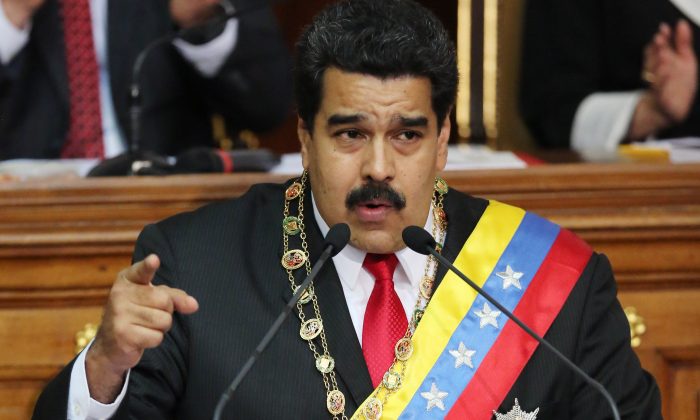 Venezuela's President Nicolas Maduro is seen in this photo. A U.S. pilot has reportedly been captured in Venezuela for allegedly trying to start a coup, authorities have said. (AP Photo/Ariana Cubillos)
Americas

A U.S. pilot has reportedly been captured in Venezuela for allegedly trying to start a coup, authorities have said.

According to CNN, “Venezuelan President Nicolas Maduro said Saturday that authorities in his country have captured ‘an American airplane pilot, who also has Latino roots.'”

He said the pilot was arrested a few days ago in Táchira near Colombia.

Maduro said the pilot was allegedly trying to recruit people to possibly try and start a coup. The pilot, he said, had “all kinds of documentation.”

CARACAS, Venezuela (AP) — President Nicolas Maduro announced Saturday that he will limit the number of U.S. diplomats allowed to work in Venezuela and also will require U.S. citizens to apply for visas if they want to visit.

Maduro said that U.S. meddling in the internal affairs of his country has forced him to adopt the series of restrictive measures.

Relations between the two countries have been steadily deteriorating. Earlier this month, Maduro accused the U.S. of working with local opposition groups to stage a coup that involved bombing the presidential palace. Washington called the accusation ludicrous.

The two countries have not exchanged ambassadors since 2010. Nonetheless, they have continued to exchange diplomatic staff. On Saturday, Maduro said the U.S. has far more officials in Venezuela than his socialist government has in the U.S.

In an address that all Venezuelan television and radio stations were required to carry, Maduro addressed Obama directly, saying the U.S. president has “arrogantly” refused to engage in talks to resolve the issues between the two countries.

“I’m very sorry, Mr. President, that you have gone down this dead end,” he said.