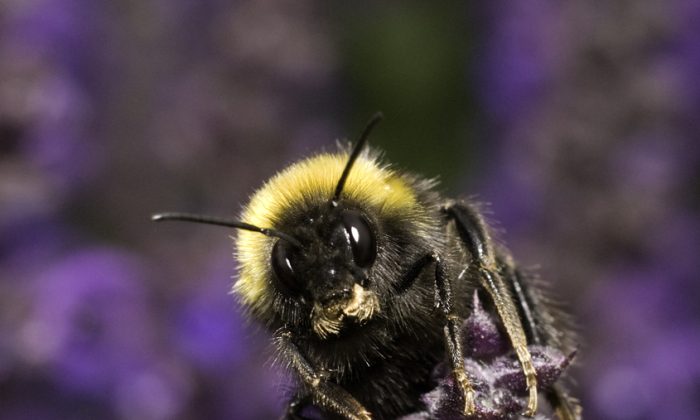 The petal surface of a Veronica flower, under a scanning electron microscope. (Beverley Glover)
Science

Special plant cells found only in flowers allow pollinators to hold on during windy weather, U.K. researchers have discovered.

These tiny pyramid-shaped cells are typically about 1/50th of a millimeter wide and occur in around 80 percent of flowers that have petals.

“Many of our common garden flowers have beautiful conical cells if you look closely—roses have rounded conical petal cells while petunias have really long cells, giving petunia flowers an almost velvety appearance, particularly visible in the dark-colored varieties,” said study lead author, Beverley Glover at the University of Cambridge in a press release.

Previous research by Glover and colleagues showed that bees prefer snapdragons with conical cells versus a mutant line that lacks them. Snapdragons are complicated flowers that are difficult for insects to enter.

“It’s a bit like Velcro, with the bee claws locking into the gaps between the cells,” Glover said.

However, these cells are also present in simpler flowers and might help with grip when it is windy.

“Many of our garden flowers like petunias, roses, and poppies are very simple saucers with nectar in the bottom, so we wanted to find out why having conical cells to provide grip would be useful for bees landing on these flowers,” Glover said.

The team compared conical-celled petunias with a mutant flat-celled variety and found that bumblebees preferred the normal ones.

Then they put the plants on a shaking platform in the lab to mimic the wind and found that the bees’ preference for conical-celled flowers increased as the wind mimicking increased.

“It’s too easy to look at flowers from a human perspective, but when you put yourself into the bee’s shoes you find hidden features of flowers can be crucial to foraging success,” Glover concluded.