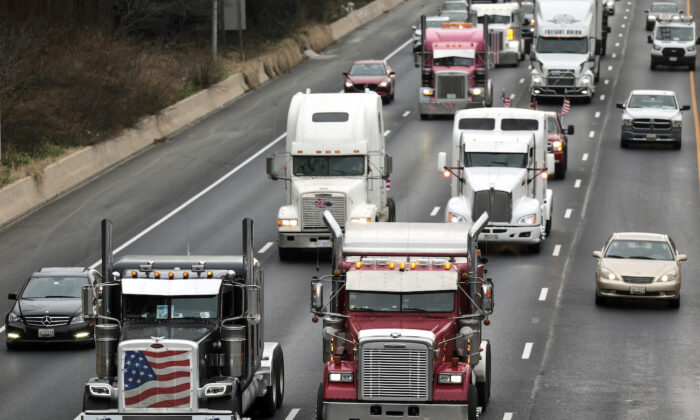 Trucks drive alongside each other as they participate in The People's Convoy on the Capitol Beltway in Bethesda, Maryland, on March 7, 2022. (Kevin Dietsch/Getty Images)
US News

Part of a convoy led by trucks rode through Washington, D.C. on Monday after more than a week of circling the nation’s capital to call for an end to the federal government’s COVID-19 emergency declaration, restrictions, and mandates.

It was the first time protesters of The People’s Convoy sought to enter the city since arriving in the area earlier this month. The U.S. convoy was inspired by trucker convoys in Canada that made global news headlines for protesting against COVID-19 restrictions. The procession started out in California on Feb. 23 and arrived in the Washington area on March 4.

Police blocked many bridges, highway exits, and city streets on Monday, preventing many of the convoy vehicles from entering downtown D.C. While many trucks were blocked, some apparently made it into the city, according to live streams posted on social media.

Prior to Monday, The People’s Convoy had been peacefully circling Washington on the Capitol Beltway, a 64-mile interstate highway that surrounds the city, in a show of force.

The D.C. Homeland Security and Emergency Management Agency announced via Alert DC early Monday afternoon that three major interstate highways in the capital region—I-395, I-695, and I-295—would face “demonstration activity” and that motorists “should expect traffic delays.” The agency advised people to consider alternative transportation or delay travel through the routes.

The Metropolitan Police Department temporarily closed some streets and highway exits “to keep traffic moving safely through the area,” according to the announcement. “These rolling road closures are occurring in real-time as they are needed, and will be lifted as soon as they are no longer necessary,” the agency said.

The convoy in the afternoon passed by the Pentagon before crossing the Potomac River into D.C. on the 14th Street Bridge. The dozens of large trucks and vehicles in the convoy were captured honking loudly amid heavy traffic delays exacerbated by their presence. D.C. Police closed access to certain city streets, slowing I-395 into downtown D.C.

After entering the city, the convoy continued to I-695 before returning to the Beltway via the Anacostia River, reported The Washington Post.

DC Police Traffic said there was “Heavy Traffic Congestion along Northbound VA-395 thru Northbound DC-395 to Southbound DC-295 to Northbound MD-495 due to the Trucker Convoy from Hagerstown, MD.”

It continued to announce updates to temporary closures of exits throughout the afternoon until about 4 p.m., when it said all traffic closures “have been lifted along DC-395/695 & DC-295.”

DC Alert announced around 4:30 p.m. local time, “All freeway exit closures associated with the demonstration activity have been lifted.”

Last week, the convoy met with Sens. Ron Johnson (R-Wis.) and Ted Cruz (R-Texas) on Capitol Hill to discuss the group’s concerns over government restrictions encroaching on the personal freedoms of Americans. That was followed by further discussions with several members of the House of Representatives.

“The meetings with congressional members marked the first step in working with elected officials to end the mandates that have resulted from the national emergency declaration,” the group said in a release on March 9.

The group had planned to stage a protest on Washington’s National Mall but withdrew its application for a permit when the National Park Service partially rejected a request to hold a two-week protest there starting March 14, according to The Washington Post.

The group demands the COVID-19 national emergency to “be lifted immediately,” according to its website. The national emergency, recently renewed by President Joe Biden, has enabled various pandemic restrictions and mandates to take effect in the United States over the past two years.

The U.S. Senate on March 3 approved a measure to end the COVID-19 national emergency, but the measure does not have enough Democratic support to pass the Democrat-controlled House. Even if Congress approves the measure, the White House indicated that Biden would veto it.