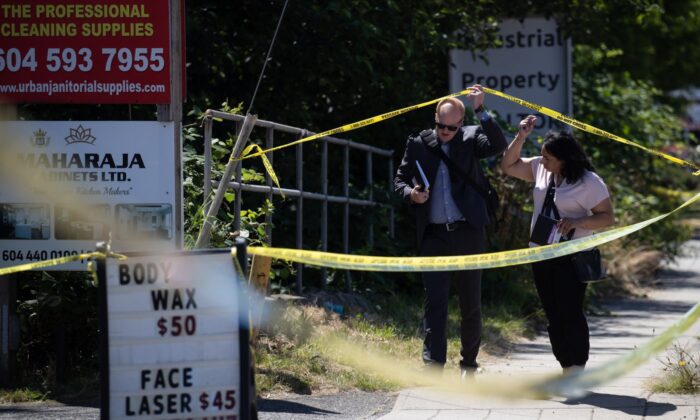 Investigators arrive at the scene of a fatal shooting, in Surrey, B.C., on July 14, 2022. (The Canadian Press/Darryl Dyck)
Canada

Vehicle Waited for Ripudaman Singh Malik Hours Before Shooting in BC: Police

A vehicle was waiting for Ripudaman Singh Malik hours before he was killed in a parking lot in Surrey, B.C., police say.

Malik was one of the two men acquitted in the 1985 Air India terrorist bombings that killed 331 people.

He was shot in his vehicle in a parking lot not far from his clothing business on Thursday. He was 75 years old.

Sgt. David Lee of the Integrated Homicide Investigation Team told a news conference that a white Honda CRV pulled up near the scene of the shooting around 7 a.m. and Malik was shot and killed at 9:27 that morning.

“The occupants were waiting for Mr. Malik,” he said.

“I can’t specify as to the number of people as I do not want to taint any witnesses. We’d like them to come forward no matter how many people they saw.”

The same vehicle was found on fire a short time later not far from where Malik was murdered.

Police released a photo and video of the car driving through a strip-mall parking lot, asking for the public’s help in finding out who was inside.

The driver can’t be seen in the video and the sun’s reflection on the passenger-side window makes it difficult to see if anyone is in that seat. The back windows are blacked out.

“We understand this is a high-profile international story, however we urge people not to speculate as to the motive,” Lee said. “Our homicide investigators will be following the evidence.”

Malik and his co-accused, Ajaib Singh Bagri, were found not guilty in March 2005 of murder and conspiracy in a pair of Air India bombings that killed 331 people on June 23, 1985.

Bombs were placed on two planes. The first aircraft blew up over the Atlantic Ocean off the coast of Ireland, killing all 329 aboard.

The second bomb that was to be transferred to an Air India jet in Tokyo exploded prematurely, killing two baggage handlers at the Narita airport.

Jaspreet Singh Malik, son of Ripudaman Singh Malik, said he doesn’t believe his father’s killing is related to the not-guilty verdict at the trial.

“I’m very much convinced this has nothing to do with that,” he said in an interview on Friday.

“Because it takes a lot to hate. It takes a lot of energy to hate, and to hate someone for 17 or more years, and then to act on hate. I just can’t imagine someone like that in the world actually exists. And it’s just hard for me to fathom.”

He believes there is another motive, and feels the RCMP will find who killed his father and why they did it, he said, adding he didn’t know what that reason might be.

“I absolutely trust the people who are involved in the investigation.”

“We’re aware of his connections with Air India, with the businesses and the schools. And we’re alive to that,” he said. “But right now, it’s too early to speculate as to the motive.”

Malik said his father didn’t express any concerns about his safety.

“Dad never said anything to us about anybody ever threatening him or anything like that.”

He highlighted his father’s work involving schools and promoting the Sikh religion, and said the elder Malik “dedicated his life to seva,” or service in the Punjabi language.

“When you’re someone who’s committed to seva, you don’t live your life with apprehension and fear,” Jaspreet Singh Malik said.

Apart from work and volunteering, he said his father enjoyed spending time with family and sightseeing. A family trip with Malik’s brothers, sisters, their children and grandchildren was planned for the last week of July, he said.

Lee said he can confirm that Malik was shot “several times” but he wouldn’t discuss the nature of the injuries because the investigation was ongoing.

An employee of a car wash near the scene of the shooting said he heard the shots and when he went outside he saw Malik, shot three times and unconscious in his vehicle.