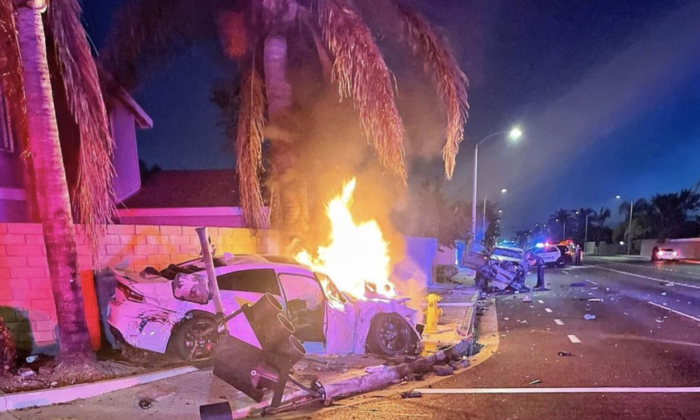 HUNTINGTON BEACH, Calif.—Two men were arrested on suspicion of stealing catalytic converters and leading Huntington Beach police on a vehicle chase that resulted in a fiery crash, authorities said Aug. 7.

A police officer spotted a speeding vehicle leaving a residential tract at about 5:15 a.m. Saturday in the area of Atlanta Avenue and Newland Street and tried to pull it over, the Huntington Beach Police Department (HBPD) reported.

The white car drove north on Newland as the officer tried to catch up. The car ran a red light and struck an uninvolved vehicle, setting the suspect vehicle on fire, police said. The two suspects inside were quickly taken into custody and rushed to a hospital with minor injuries.

The driver of the other vehicle suffered minor injuries. It was not immediately known if that person was taken to a hospital.

“A search of the suspects’ vehicle revealed multiple freshly cut catalytic converters, a saw and numerous used and new blades,” according to a police statement.

The investigation is ongoing, and no additional details were released.

Anyone with information related to the investigation was asked to call the HBPD WeTip Hotline at 714-375-5066. Those wishing to remain anonymous may contact OC Crime Stoppers at 855-847-6227.