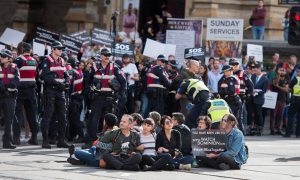 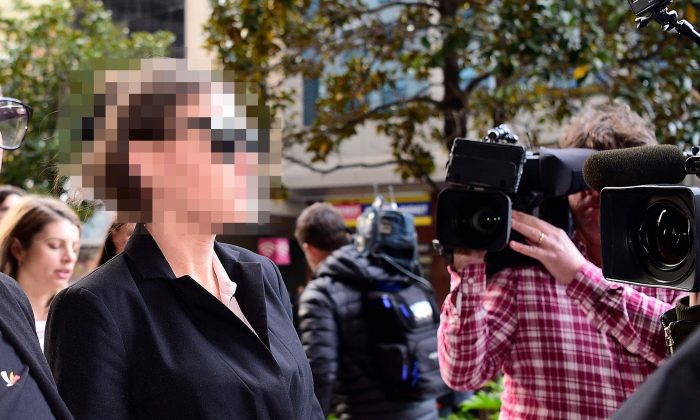 The mother of a girl who was found severely malnourished leaves court in a file photograph. She and her husband avoided jail time after pleading guilty to failing to take care of the child. (AAP Image/Bianca De Marchi)
Australia

The parents who fed their daughter a diet so lacking in nutrients that she became severely malnourished got away with no prison time as a judge handed down a sentence this week.

The girl’s parents pleaded guilty to failing to provide for their daughter, causing danger of serious injury.

Court documents showed that the girl was fed only oats, potatoes, rice, tofu, bread, peanut butter, rice milk, and fruit. She lacked a number of nutrients, including calcium, vitamin B12, and zinc.

Doctors said that the girl appeared to be three months old. Her actual age was 19 months. She lacked teeth when she was rushed to the hospital in March 2018 after suffering a seizure.

A Sydney #vegan couple has dissolved into sobs in court after being sentenced for the cruel malnourishment of their 20-month-old baby. https://t.co/vaQRNvoiKx

The girl’s former foster carer told the court that the girl could not sit up, roll over, or hold her own bottle despite nearly being 2 years old.

“I remember thinking how terrifying this must be [for her],” the carer said in a statement read out in court, adding that the toddler’s small stature continues to shock people.

The preschooler, who is now almost 3, is obese because her height is so disproportionate to her weight, the carer added.

“It’s like her body is storing calories in case she needs them in the future,” the carer said.

Vegan couple have avoided jail after feeding their toddler a vegan diet that caused her to become so malnourished she didn’t have any teeth. Judge Sarah Huggett said a jail term would deprive their three children of an “important bond”. https://t.co/VpNQ38cUXm

The girl’s parents, who were never identified because of Australia’s strict privacy laws, each faced up to five years in jail but avoided prison as District Court Judge Sarah Huggett sentenced them both to 18 months “of an intensive corrections order in the community and 300 hours of community service,” reported ABC.

Huggett described the medical problems the girl suffered from in court on Aug. 22 as the parents listened and eventually cried.

“It is the responsibility of every parent to ensure the diet they choose to provide to their children … is one that is balanced and contains sufficient essential nutrients for optimal growth,” she said. “There must have been ample opportunity for her condition to be acted upon.”

The sentencing came after one psychiatrist said the mother’s postnatal depression didn’t prevent her from caring for the girl while another said the woman showed symptoms of major depression. The mother also told the psychiatrist she didn’t believe there was anything wrong with her daughter before the seizure happened.

A Sydney couple whose baby daughter was found to be severely malnourished after being fed a strict vegan diet, mostly of oats, have been spared jail. The judge said their parenting had been a “reckless failure”: https://t.co/6RkXKehraU @newscomauHQ

That analysis was taken into account for the sentencing. The judge said the mother suffered from long-term postnatal depression to an extent.

“I say ‘to an extent’ because this offence was committed over a substantial period of time,” she said, reported the Sydney Morning Herald. “The father’s abandonment of his parental responsibility cannot be justified or excused on the basis that he was busy or preoccupied,” she said.

The judge also said that sentencing the parents to jail would deprive the children of an “important bond.”

The girl was later reunited with her two siblings and is being cared for by an aunt. The parents are able to see the children during supervised visits.