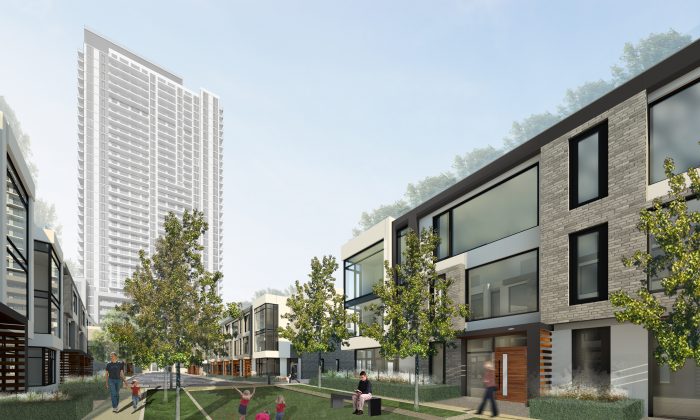 In a city proliferated with homebuilders and land developers, it’s often a monumental task to stand apart from the fray—but Plaza Corp. has realized such a feat with its nomination in the high-rise category of Tarion’s prestigious Homeowners’ Choice Awards for customer service.

Customers answered survey questions, and a final tally gave Plaza a nod for the 2016 nomination.

Plaza’s senior vice president, Scott McLellan, told the Epoch Times that the company continually strives to improve upon previous builds to assuage the usual trials that come with acquiring homeownership.

“One of the great things our company really makes a priority and really understands is our commitment to our customers and our zero-deficiency policy,” said McLellan, a former member of the NHL’s Boston Bruins. “We go through a strenuous four-point process once the suites are built. There are a number of inspections with the sales team, the internal construction team, customer care people, and finally our purchaser. By that stage we have zero deficiencies.”

Plaza is among the city’s smaller builders, but the reputation that precedes it could certainly fool you. There are few condo units, if any, in the GTA built better than Plaza’s. Yet it isn’t only the apical degree to which Plaza builds condominiums that has garnered the company accolades—and perhaps most importantly, happy customers—it’s the company’s building strategy.

As the old real estate axiom goes, location is everything, and Plaza understands the importance of building around transit. Although typically a downtown builder, its latest condominium development, Residences at The Met—appositely named after the Vaughan Metropolitan Centre, a megaproject that will urbanize Vaughan—is yet another testament that Plaza understands the essence of prime location, because the VMC will be host to a new TTC subway station next year.

“We generally try to be close to universities, easy access to freeways and the 400-series, subway lines and amenities,” McLellan said of The Met, which set a sales record in Vaughan by selling 500 units in six weeks. “Vaughan is interesting because there’s a subway line being built there and The Met is right next to the subway, right next to Highway 7 and Hwy 400, and the new Vaughan Metropolitan Centre is going to be the best downtown in the GTA after Toronto’s.

The VMC will undoubtedly transform Vaughan from a sleepy suburb strewn with detached houses into an urban hub of commerce, residences and transit. In addition to 139,350 square metres of office space, 12,000 condo units will be built in the area.

“It’s already started. There will be a million-and-a-half feet of commercial and retail, another million of office space,” said McLellan. “The vision Vaughan has for its downtown is incredible.”

While the VMC’s development is a cornerstone of Vaughan’s transformation, the TTC subway extension will be its apex.

Vaughan’s downtown won’t go dormant at the conclusion of the workday; instead, residents and workers can enjoy its myriad new entertainment opportunities. Everything from high-end restaurants and wine bars to movie theatres, and boutique stores will open around the VMC.

And because Vaughan’s expects to build a downtown rather than a glorified city centre—like Mississauga’s—the Chinese community is keenly following the revitalization. McLellan says Plaza employs Mandarin and Cantonese speakers, in part to cater to one of the largest ethnic communities in Toronto, and that word of Plaza developments spread through the community like wildfire.

McLellan also says they’re demanding, but fair customers, and that they do their research before visiting sales centres. Newcomers to Canada, in particular, usually consume brands they trust, whether clothing or car brands, and McLellan said he’s gratified the community trusts Plaza enough to live in its condos.

“They also want to make sure they’re getting good value and that we use the best materials, whether they’re Moen faucets, hard surface flooring, and full-sized kitchen appliances, even in condos,” he added. “Our basic finishes and features are everybody else’s upgrades.”

The Met certainly meets the value criterion. McLellan said it is nearly $200 cheaper than comparable suites in downtown Toronto—which will be a quick subway ride away.

“If you take a project that’s at Yonge and Wellesley, you’re talking between $650 to $700 per square foot, plus parking,” he said. “We sold at the Met (which is about a 45-minute subway ride further north) for $150 less than comparable product in downtown Toronto on a subway line.”

With York University nearby, McLellan added that many parents are buying units at The Met as an investment—both for their children and themselves.

“People are buying units for their kids, then their kids graduate and they make the lifestyle change and move into that unit.”