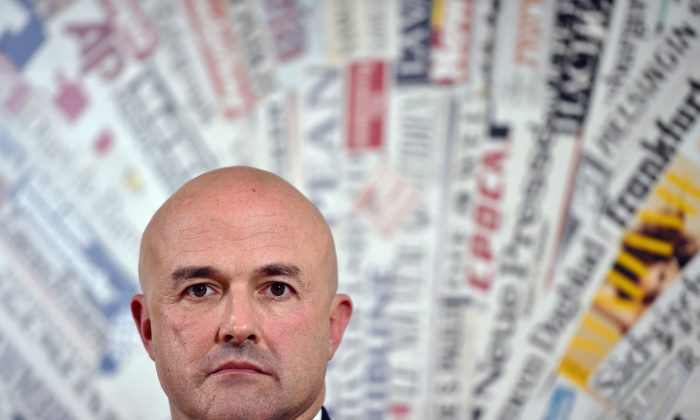 Italian investigative journalist and writer Gianluigi Nuzzi at a press conference at the Foreign Press Club (Stampa Estera) in Rome on Nov. 24, 2015. His book "Merchants in the Temple" has rocked the Vatican. (Gabriel Bouys/AFP/Getty Images)
Europe

For the second time in four years, the Vatican has been plunged into crisis by the publication of books exposing not only the battles for power within its hallowed walls, but also the misbehavior of staff members of the Roman curia, the governing bureaucracy of the Roman Catholic Church.

In his latest book, Merchants in the Temple: Inside Pope Francis’ Secret Battle Against Corruption in the Vatican, investigative journalist Gianluigi Nuzzi lays bare the resistance which the Argentinian pope has encountered in his efforts to clean up not only the Vatican Bank (Istituto per le Opere di Religione) but also the wider financial mismanagement that has been endemic in the Vatican for years.

The first claims about financial mismanagement, this time in the Vatican City of which the pope is head of state, came from Archbishop Carlo Maria Viganó who was head of its administration. After his claims were made public, Viganó was packed off to Washington as papal envoy to the US. But the “Vatileaks” scandal really broke in January 2012 with programs on Italian television that revealed the goings-on behind the scenes in the Vatican of Benedict XVI.

In May of the same year, Nuzzi published His Holiness: The Secret Papers of Benedict XVI, which further revealed the in-fighting around the ailing and ageing pope, including the existence of an alleged “gay lobby.” Eventually, the investigation by the Papal Gendarmerie, the Vatican police, identified the pope’s butler, Paolo Gabriele, as the person who had removed the papers from Benedict’s private apartment. After being tried and spending a few months in the Vatican jail, Gabriele was eventually pardoned by the pope.

But the scandalous stories swirling around the Vatican in 2012 and early 2013 undoubtedly contributed to Benedict’s decision in February 2013 to resign, the first pope to do so since Celestine V in 1294 (in his case, after only a few months in office). Though in his resignation speech Benedict attributed his decision to age and infirmity, by then he felt that the Vatican was out of control and he clearly had little confidence in his “chief minister,” Cardinal Secretary Tarcisio Bertone against whom allegations of cronyism and incompetence have been made.

The subsequent election of Cardinal Jorge Bergoglio, archbishop of Buenos Aires, less than a month after Benedict’s resignation, as the first non-European pope in hundreds of years, was the clearest indication that the cardinals of the worldwide Roman Catholic Church wanted change, a cleansing of the Augean Stables and a substantial reform of the Roman curia.

This is indeed the program on which Francis I has embarked. So far, he has had notable success in making the Vatican Bank more accountable to both the Vatican and European financial authorities and ridding it of dubious accounts whose holders used them for the purposes of money-laundering and even, allegedly, sanctions busting.

What Will Happen When the Pope Meets the Patriarch?

But the latest Vatileaks episode only confirms what has long been known, that resistance inside the Vatican to Francis’ reforms is strong and tenacious and that the bad habits long-established there die hard. Among his revelations are that a canonization (the investigatory process leading to the declaration that someone is a saint) can cost over half a million pounds (US$755,000) and that costs remain out of control in some dicasteries (departments) of the Roman curia.

There has been unhappiness in Italy for years over the financial privileges and tax exemptions of the Roman curia and related organizations, not to mention the thousands of religious houses—some of which operate extremely profitable businesses throughout the peninsula. But these latest revelations once again cast the Vatican and its financial management in a bad light which, in the long term, will certainly affect the willingness of the Catholic faithful throughout the world to contribute to funding the headquarters of their church through the annual “Peter’s Pence” collections.

The Vatican of Francis I is no happier with the second Vatileaks episode, than Benedict’s Vatican was with the first and so investigations have been carried out and arrests made. This time they involve a Spanish monsignor, Lucio Angel Vallejo Balda, and an Italian PR expert, Francesca Chaouqui, both recent appointments to Francis’ reform commissions. The Nuzzi revelations are regarded as being hostile to Francis, but it could equally well be argued that they support his cause inasmuch as they demonstrate the strength of opposition to his reforms in the curia and potentially isolate his chief opponents there.

It can also be argued that all this is simply a case of chickens coming home to roost. The fact that the curial bureaucracy is located in a sovereign state, the Vatican City, or in “extra-territorial” buildings scattered through Rome, that it is the servant of an infallible religious leader—the pope—and that the Vatican Bank, in particular, has been virtually immune from effective oversight has inevitably led to mismanagement, cronyism and corruption.

It must also remain a matter of scandal to many Catholics that the curia is largely staffed by priests (and a few nuns) whereas there are many Catholic dioceses throughout the world desperately short of priests to say mass and administer the other sacraments, ironically enough, especially in Latin America.

John Pollard is a fellow and director of Studies in History at Trinity Hall, University of Cambridge, in the U.K. This article was originally published on The Conversation.