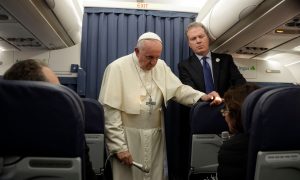 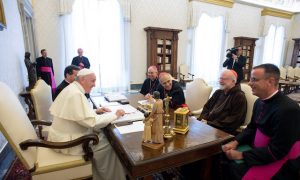 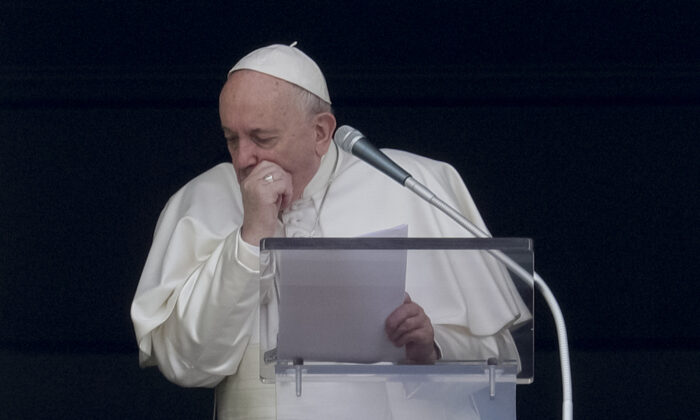 Pope Francis coughs during the Angelus noon prayer he recited from the window of his studio overlooking St. Peter's Square at the Vatican on March 1, 2020. (Andrew Medichini/AP Photo)
Europe

The Vatican responded to questions and speculation about Pope Francis’s health after the pontiff missed several events last week and appeared visibly ill in photos.

In a Wednesday statement, Vatican spokesman Matteo Bruni said that Francis merely has a cold, not the COVID-19 coronavirus. Italian paper Il Messaggero reported that he tested negative for COVID-19, but the Vatican didn’t mention this in its statement.

His cold is “running its course, without symptoms linked to other pathologies,” the Vatican said in a statement to the Catholic News Agency. The Holy See added that Pope Francis has a “common cold,” and doesn’t have “symptoms caused by other diseases.”

“Pope Francis celebrated daily mass and follows the spiritual exercises that are taking place at the Casa Divin Maestro in Ariccia,” the Vatican said.

Francis on Feb. 27 canceled visits with his larger audiences due to his health and worked in the Vatican’s Casa Santa Marta guesthouse, according to reports. At the time, officials said he was suffering from a “slight indisposition.”

He offered his early morning masses on Feb. 27 to Feb. 29 in Santa Marta, and on March 1, he led the weekly Angelus from a window of the apostolic palace overlooking St. Peter’s Square, pausing several times to cough.

“Unfortunately, a cold forces me not to participate this year: I will follow the meditations from here,” he also said, according to the news agency.

The development comes as Italy grapples with an outbreak of COVID-19 in several northern regions such as Lombardy and Veneto. On Wednesday, Italy announced it would close universities and schools after reporting some 2,500 cases and 52 deaths, according to reports.