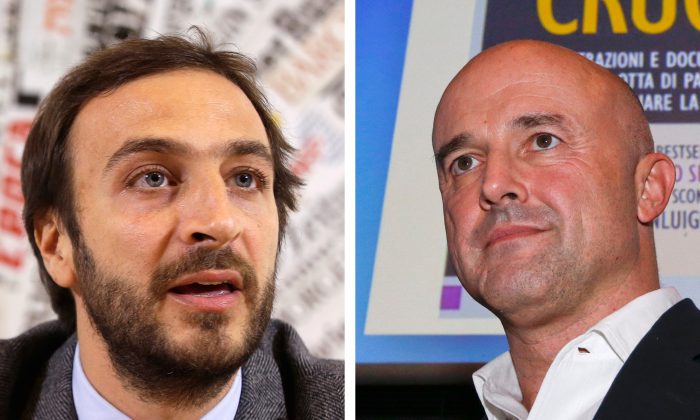 This combo of file photos shows journalists Emiliano Fittipaldi (L) during a presser in Rome, on Tuesday, Nov. 17, 2015 and Gianluigi Nuzzi during the presentation of his new book "Via Crucis" ("Merchants in the Temple", in the English edition) in Milan on Monday, Nov. 16, 2015. A Vatican judge has indicted five people Saturday, Nov. 21, 2015, including the two journalists Gianluigi Nuzzi, Emiliano Fittipaldi, and a high-ranking Vatican monsignor Lucio Vallejo Balda, in the latest scandal involving leaked documents cited in recent books alleging financial malfeasance in the Roman Catholic Church bureaucracy. (AP Photo/Gregorio Borgia, Luca Bruno)
Europe

Two members of the pope’s reforms commission and a newly identified assistant were indicted on charges of disclosing confidential Vatican information and documents, while two journalists were indicted on a charge of soliciting and exerting pressure to obtain the information, according to the indictments released by the Vatican on Saturday.

Monsignor Lucio Vallejo Balda and Francesca Chaouqui were arrested by the Vatican earlier this month; Balda is being held while Chaouqui was released after agreeing to cooperate with the investigation. The indictment also identifies for first time an assistant to Balda, Nicola Maio, as under suspicion.

Pope Pledges to Continue Reforms in Face of Leaks

Nuzzi, who refused a Vatican summons for questioning, was defiant in a message on Twitter. “You can do what you want but as long as the world exists, there will be journalists who report uncomfortable news,” he wrote.

Fittipaldi appeared for questioning but refused to give any answers, citing Italian law on protecting sources.

If the Vatican tribunal ultimately convicts the two authors, it will come down to a political question as to whether the Holy See will request their extradition from Italy—and whether Italy will oblige.

Trial is set to begin on Tuesday. The trial will be open to the press, as was the case previously in the case of documents leaked during the papacy of Benedict XVI. After formalities on Tuesday, the trial is expected to resume the following week.