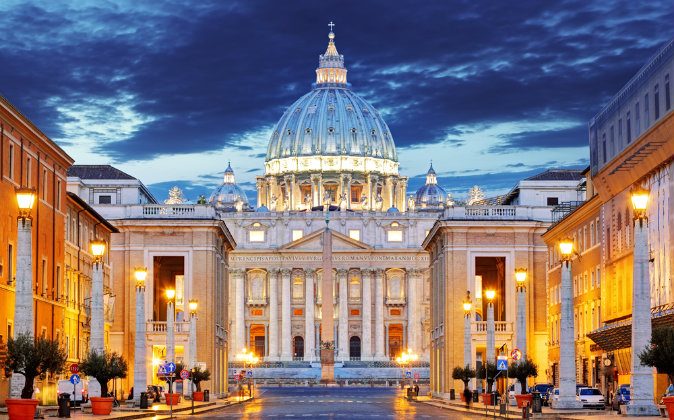 Papal Basilica of Saint Peter in the Vatican. (Shutterstock)
Opinion

Much commentary has emerged on the recent conference on combating organ trafficking and transplant tourism hosted by the Pontifical Academy of Sciences at the Vatican.

violated the ethical principles governing the World Medical Association, the World Health Organization, the United Nations, The Transplantation Society and the Declaration of Istanbul. As a high-ranking official of the Chinese Communist Party (CCP) and liver transplant surgeon, he designed and implemented a vast system of state-sanctioned organ harvesting from executed prisoners and prisoners of conscience across China. He admits that virtually all transplanted organs up until recently came from executed prisoners, and … that he himself was personally engaged in this practice, transplanting more than 500 livers during years when there were no voluntary organ donors at all.

Anyone waiting for a new transplantation law in China must acknowledge that any notion of Chinese “law” is fictitious. Clive Ansley of Canada, who practiced law in Shanghai for 14 years until the mid-2000s, states:

China is a brutal police state…Our position is based on irrefutable evidence of what is actually happening…we can prove the statistics on actual transplants carried out; we can prove that these numbers are utterly irreconcilable with the available sources, in the absence of mass murder perpetrated against prisoners of conscience. We are interested only in the evidence of what is actually happening; we have only a passing interest in the content of Chinese legislation attempting to paper over reality, and we have no interest whatsoever in the palpable falsehoods of Huang Jiefu.

As spokesperson for China’s organ transplant network, Huang is barred from providing an honest account of the source of organs for transplantation. By inviting him, the Vatican was implicitly endorsing a murderous large scale procurement of organs underway across China since at least 2001. Organ trafficking today is certainly an international black market scourge, but it appears to be only in China that innocent citizens are killed for their organs by the government and its agents.

The Vatican earlier experienced a deeply troubled history in confronting the Holocaust while it was occurring until 1945. It should not now turn a blind eye to compelling evidence of mass murder of innocents occurring across China. Pope Francis should not be faulted for what occurred. His Holiness has termed “trade in human beings, a modern form of slavery.” He also abstained from addressing the Vatican conference.

The International Coalition to End Organ Pillaging in China requested unsuccessfully that Huang’s presence be balanced by evidence about past and current organ harvesting in China from prisoners of conscience, who are killed expressly for the purpose of retrieving their organs, rather than death row criminals. These include Uyghurs, Tibetans, practitioners of the Buddha-school Falun Gong, and some house Christians, who are detained in Chinese labour camps and are inhumanly subject to summary execution for their organs.

Huang claimed that China would cease using organs from executed prisoners as of Jan. 1, 2015, but the Chinese regime has created no new orders outlawing the use of such organs. Nor has it acknowledged using the organs from prisoners of conscience.

A detailed “Update” published last June cites evidence from numerous sources to document contemporary practices and estimates the current volume of transplants in China to far exceed either the number of persons subject to the death penalty or the number of volunteer citizen donors.

Confidence in the “Update’s” findings has been expressed. The U.S. Congress passed House Resolution 343 condemning the practice. Similarly, the European Parliament has held hearings and passed various resolutions, notably the Written Declaration 0048/2016. The UK parliament has held hearings on the question and the Conservative Party’s Human Rights Commission has also produced a report documenting the practice.

The alleged reform of China’s transplant system is supported solely by promises made by Huang Jiefu, which are taken to represent state policy. But with no statutory or regulatory framework outlawing use of prisoner organs, and no punishment or accountability for those who have engaged in such homicidal conduct, these claims are scarcely credible.

The conference should have considered the plight of incarcerated prisoners in China who are treated as expendable human organ banks. There is no evidence that this practice has ceased in China. On the contrary, there is much evidence from official websites across China that it continues. Officials from China should not be given the prestigious platform of the Pontifical Academy of Sciences to spread misinformation about reform in China.