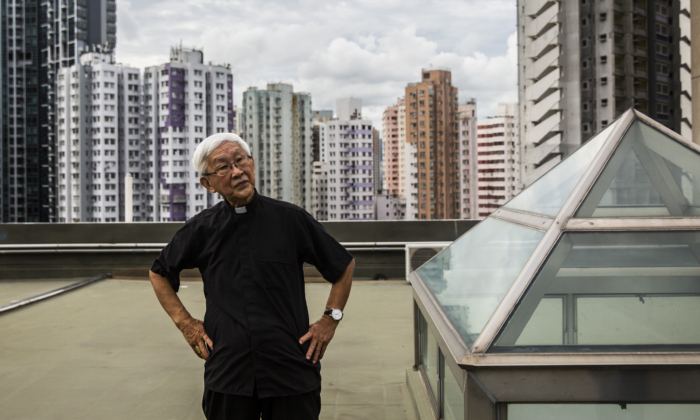 Cardinal Joseph Zen, former bishop of Hong Kong, poses for a photo on the rooftop of his residence during an interview with AFP in Hong Kong on Sept. 11, 2020. (Isaac Lawrence/AFP via Getty Images)
Asia & Pacific

Vatican Concerned With Arrest of Cardinal in Hong Kong

VATICAN CITY—Following reports of the arrest of Cardinal Joseph Zen Ze-kiun in Hong Kong on May 11, the Vatican issued a statement that it was monitoring the situation.

“The Holy See has learned with concern the news of Cardinal Zen’s arrest and is following the development of the situation with extreme attention,” read the statement in Italian, released by the Vatican’s press office to members of the press.

Zen, 90, is known for being outspoken in his support of the intrinsic freedoms promoted by the Hong Kong pro-democracy movement, including the freedom of religion.

Hong Kong police arrested Zen—along with Denise Ho, Hui Po-keung, and Margaret Ng—reportedly for their roles as trustees for the 612 Humanitarian Relief Fund. This fund was founded to aid pro-democracy protestors with their legal fees after hundreds were detained in the protests over the last three years.

In a 2020 interview for the National Catholic Register, Zen stated that he was aware of the dangers he faced as he stood for the rights of the people who protested Beijing’s National Security measures enforced in Hong Kong.

“Obviously they wanted to silence our voice.” he said. “That’s also terrible because that was the only thing left for us—our voice.”

“As a senior citizen I have to speak out my mind and so I think they have more than enough material to accuse me, and so to take me away. It will not be a surprise, but I am not doing anything to provoke that,” he added. “I’m working also as one of the trustees of a foundation to help those in difficulty. And so we are in the hands of God.”

The Standard reported that Zen was released, this evening, on bail but will still face charges that he and the other trustees “colluded with foreign forces”.

Zen’s secretary did not respond to a request for comment.