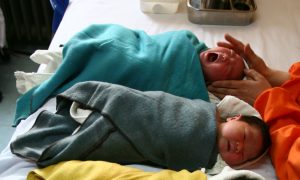 The Vatican signed an agreement with Beijing on Sept. 22 that would allow the Chinese authorities to appoint China’s bishops, in a move that critics say is capitulating to the Chinese regime.

The Vatican and CCP broke off relations in 1951. The CCP has since insisted on nominating its own bishops, despite Vatican tradition that mandates bishops can only be approved with the consent of the Pope.

Pope Francis has now endorsed the legitimacy of these Beijing-appointed bishops.

“Pope Francis hopes that, with these decisions, a new process may begin that will allow the wounds of the past to be overcome, leading to the full communion of all Chinese Catholics,” the Vatican said in a statement, according to The Associated Press. The Vatican, meanwhile, stated that the move was “not political but pastoral.”

Zen said that he believed that the Vatican and the CCP are making a “secret deal.”

“They’re giving the flock into the mouths of the wolves,” he said of the Vatican’s move to effectively pledge allegiance to the Communist Party, according to VOA News. “It’s an incredible betrayal,” he said.

Vatican Secretary of State Pietro Parolin, a top negotiator in China, “should resign” over the move, Zen said. “I don’t think he has faith. He is just a good diplomat in a very secular, mundane meaning,” he added.

China has about 12 million Catholic adherents, who are split between underground churches that swear allegiance to the Vatican and state-backed Catholic Patriotic Association churches.

Human rights groups have documented systematic persecution of underground Christians in China. According to Human Rights Watch, more than a dozen Christians in Yunnan Province were charged by CCP officials in 2017 with “using cults to sabotage law enforcement.” It added: “In October, at least three of the charged were given prison sentences of four years. One of their lawyers said the arrests were due to the group not gathering at officially designated churches.”

Zen, in a blog post on Sept. 22, criticized the Vatican-CCP deal. The announcement over the weekend could be boiled down to a few words, he wrote: “The Holy See has signed an Agreement with the People’s Republic of China on the appointment of Bishops.”

“To say that the agreement is provisional without specifying the duration of its validity is saying nothing,” Zen wrote in English. “All agreements may be said to be provisional, because one of the two parties may, for any reason, demand a revision or even annulment of the Agreement. But until that happens, the agreement, though provisional, remains the valid agreement.”

The deal, he said, is likely tantamount to the CCP telling Catholics “obey to [sic] us” because “we are in agreement with your Pope!”