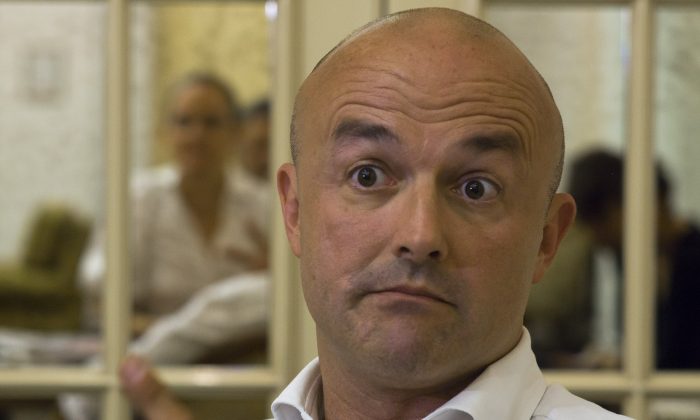 Gianluigi Nuzzi, the investigative journalist who published a book of leaked papal documents, is portraited during an interview with the Associate Press, in Rome, on May 30, 2012. A new book about the Vatican by Nuzzi is due out on the Italian bookstores Nov. 5. (AP Photo/Domenico Stinellis)
Europe

VATICAN CITY—The Vatican said Monday it had arrested a high-ranking priest and another member of a papal reform commission on suspicion of leaking confidential documents—a stunning move that comes just days before the publication of two books promising damaging revelations about the obstacles Pope Francis faces in cleaning up the Holy See’s murky finances.

The developments threatened to become a new “Vatileaks”—the 2012 scandal that began with the publication of a blockbuster book by Italian journalist Gianluigi Nuzzi detailing the corruption and mismanagement in the Holy See. The scandal ended with the conviction of Pope Benedict XVI’s butler—and Benedict’s resignation a year later.

The latest arrests of two advisers hand-picked by Francis to help in his effort to overhaul Vatican finances threatened to further expose infighting and rifts surrounding the pope’s efforts at reform and a more open church.

Monsignor Lucio Angel Vallejo Balda, a Spaniard, and Francesca Chaouqui, an Italian public relations executive, had served on a now-defunct financial reform commission set up by Francis in 2013 as part of his drive to clean house at the Vatican, especially in its scandal-tainted economic affairs.

A Vatican statement said the arrests followed a monthslong investigation and that the two had been interrogated over the weekend. It said Vallejo Balda was being held in a jail cell in Vatican City, while Chaouqui was released Monday because she was cooperating with the investigation.

The Vatican’s statement stopped short of linking the latest leaks probe to the two potentially bombshell books that go on sale Thursday.

The Vatican described the books as “fruit of a grave betrayal of the trust given by the pope, and, as far as the authors go, of an operation to take advantage of a gravely illicit act of handing over confidential documentation.”

“Publications of this nature do not help in any way to establish clarity and truth, but rather generate confusion and partial and tendentious conclusions,” the Vatican said, noting that “the leaking of confidential information and documents is a crime” under a law enacted in the first months of Francis’ papacy.

Nuzzi’s 2012 best-seller, “His Holiness,” based on leaked papal correspondence detailing corruption, infighting and intrigue in the Vatican has been cited by some as inspiring Benedict XVI’s stunning resignation from the papacy in 2013.

According to the publishers, Nuzzi’s new book, “Merchants in the Temple: Inside Pope Francis’s Secret Battle Against Corruption in the Vatican,” promises to reveal “heretofore untold, unbelievable stories of scandal and corruption at the highest levels.”

“A veritable war is waging in the Catholic Church,” a news release quotes Nuzzi as saying. “On one side, there is Pope Francis’ strong message for one church of the poor” and on the other, “there is the opaque and aggressive power systems within the Vatican’s hierarchy.”

The other book, “Avarice: Documents Revealing Wealth, Scandals and Secrets of Francis’ Church,” is by Italian journalist Emiliano Fittipaldi. He writes for L’Espresso newsweekly, which has published some of the most damaging leaks of Francis’ papacy, including most recently a letter by 13 cardinals warning Francis about his family synod.

According to the publisher, Fittipaldi’s book maps out the church’s financial empire, from the luxurious lives of the cardinals to the big businesses of Catholic-run hospitals in Italy.

Speaking Monday to Italy’s Repubblica TV, Fittipaldi said his book “doesn’t talk about Francis, but about a church that seems very distant from the mottoes of the pope.”

He said it was his understanding that the arrested pair had been accused of leaking “news for my book and that of my colleague,” Nuzzi.’

While Francis is intent on modernizing the Vatican and making its finances more transparent, the arrests were the latest confirmation that scandal and intrigue still swirl, as they have for centuries, through the largely closed world of the Vatican’s administrative bureaucracy.

Elected on a mandate from his fellow cardinals to reform the Vatican’s bureaucracy and bring order to its haphazard finances, Francis in 2013 created the commission Vallego Balda and Chaouqui served on to gather information from all Vatican offices to try to shed light on the Holy See’s overall financial situation and end an entrenched culture of mismanagement, opaqueness and waste.

Francis named the Maltese financier Joseph Zahra to head the commission and Vallejo Balda as his No. 2. Chaouqui was named one of the six other commission members.

The commission was given broad powers to solicit information from traditionally independent Vatican offices that were none too pleased to divulge their assets to a group of outsiders, regardless of their papal mandate. But the commission did its job, coming into possession of thousands of pages of information, such as the existence of “secret” accounts held by the Secretariat of State that had never figured into the Vatican’s consolidated balance sheets.

That two of the commission members now stand accused of leaking documents is a remarkable new chapter in the Vatileaks saga, but it’s unclear if the investigation will stop with them.

The 33-year-old Chaouqui, who favors slim-fitting jeans and long, bouncy hairdos, cut a figure in sharp contrast to the more somber dress of the relatively few laywomen with roles at the Vatican. She is being defended by Giulia Bongiorno, one of Italy’s top criminal lawyers who won acquittal for Amanda Knox’s co-defendant in their internationally watched murder trial.

Opus Dei, the conservative Catholic religious movement, expressed “surprise and pain” over Vallejo Balda’s arrest, who it described as belonging to a priestly society linked to Opus Dei.

If the allegation turns out to be proven, it will be particularly painful because of the damage done to the church,” it said in a statement.