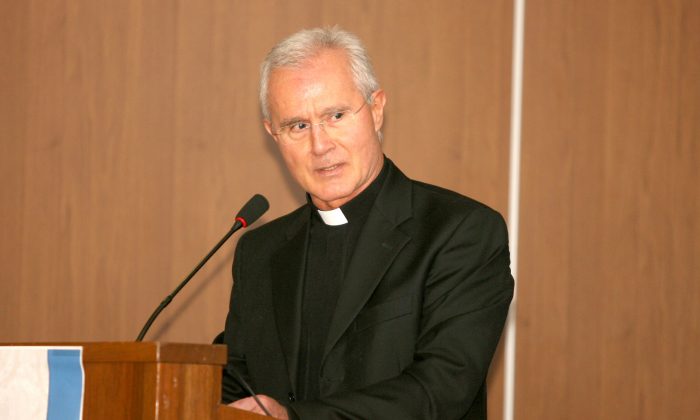 An undated photo of Monsignor Nunzio Scarano in Salerno, Italy. A Vatican official already under investigation in a purported money-laundering plot involving the Vatican bank was arrested Friday, June 28, 2013, in a separate operation: Prosecutors allege he tried to bring 20 million euros ($26 million) in cash into Italy from Switzerland aboard an Italian government plane, his lawyer said. Monsignor Nunzio Scarano, a recently suspended accountant in one of the Vatican's main financial departments, is accused of fraud, corruption and slander stemming from the plot, which never got off the ground, attorney Silverio Sica told The Associated Press. He said Scarano was a middleman in the operation: Friends had asked him to intervene with a broker, Giovanni Carenzio, to return 20 million euros they had given him to invest. Sica said Scarano persuaded Carenzio to return the money, and an Italian secret service agent, Giovanni Maria Zito, went to Switzerland to bring the cash back aboard an Italian government aircraft. Such a move would presumably prevent any reporting of the money coming into Italy. The operation failed because Carenzio reneged on the deal, Sica said. (AP Photo/Francesco Pecoraro)
Europe

Vatican accountant Monsignor Nunzio Scarano was arrested by Italian authorities for helping to plot the smuggling of nearly $27 million from Italy to Switzerland, it was reported.

Scarano, 61, had worked as a senior accountant for the Vatican’s financial administration. He was arrested along with an Italian secret service agent and another a financial broker, reported ABC News.

They plotted to sneak in bags containing the millions in cash.

Scarano was accused of fraud, slander, and corruption, serving as the middle-man in flying the cash from Switzerland to Italy. He was suspended from his Vatican job last month after allegations of money laundering surfaced.

He was suspended “for over a month, as soon as his superiors were informed that he was under investigation,” Vatican spokesman Father Federico Lombardi told the Catholic Herald Online.

On Friday, the Vatican pledged to cooperate “fully” with Italian investigators.