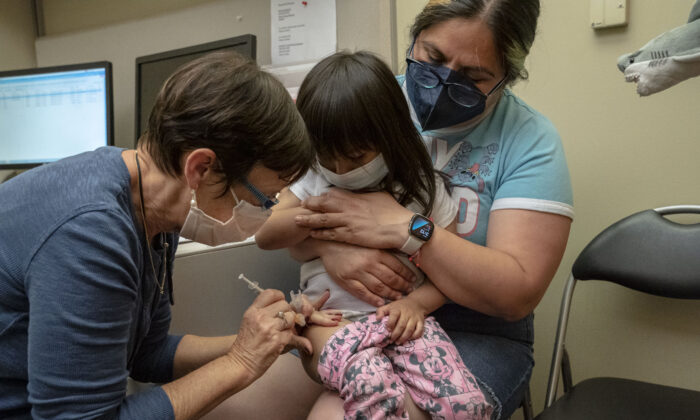 A 2-year-old receives her first dose of the Pfizer COVID-19 vaccination from a nurse while being held by her mother, at UW Medical Center - Roosevelt in Seattle on June 21, 2022. (David Ryder/Getty Images)
Vaccines & Safety

More than a month after the Centers for Disease Control and Prevention (CDC) recommended COVID-19 vaccines for very young children, only a small percentage have actually received the vaccine, according to federal data.

Data published by the CDC on Aug. 8 show that about 755,730 children aged 6 months to 4 years have received at least one vaccine dose since June 18, when Food and Drug Administration (FDA) emergency use authorization for Moderna’s and Pfizer’s mRNA vaccines were recommended by the CDC for the baby-toddler group. On its website, the CDC doesn’t indicate how many children aged 6 months to 4 years are fully vaccinated.

In Florida, Gov. Ron DeSantis said in June that the vaccine hadn’t gone through enough testing and clinical trials to determine whether it’s actually effective in younger children. Florida became the only state to explicitly advise against young children getting the vaccine, and it didn’t preorder vaccines for the younger-than-5 age group.

“When asked in their own words for the main reason why they will not vaccinate their eligible child under 5 … parents cite concerns about the newness of the vaccine and not enough testing or research, concerns over side effects, and worries over the overall safety of the vaccines,” the KFF said of its poll, which was released on July 26. “Additionally, about one in ten parents say they do not think their child needs the vaccine or say they are not worried about COVID-19.”

A majority of parents of young children, 55 percent, say that information from federal agencies about COVID-19 vaccines “is confusing.”

CDC officials didn’t respond to a request for comment on the latest vaccination figures.