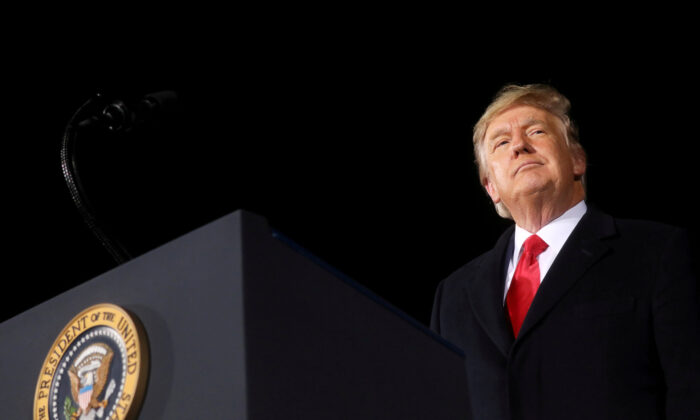 President Donald Trump addresses a campaign rally on the eve of the run-off election to decide both of Georgia's Senate seats in Dalton, Ga., on Jan. 4, 2021. (Leah Millis/Reuters)
Politics

Vast Majority of GOP Voters Say Leaders Should Be ‘More Like’ Trump: Poll

A new poll found that 73 percent of likely Republican voters said that the party’s leaders should be “more like” former President Donald Trump.

Rasmussen, which some have termed Republican-leaning, was often cited by Trump during his term in office.

The Rasmussen poll was conducted between Feb. 16 and Feb. 17, surveying 1,000 likely voters. It has a margin of error of 3 percentage points.

The poll’s findings, however, echo results from other surveys that found that Republicans still view Trump quite favorably.

Earlier in the month, a CBS News poll found that around 70 percent of Republicans would join or consider joining a new political party if the former commander-in-chief started one. In addition, 46 percent of respondents identified as Republicans said they believe it is “very important” for the party to remain loyal to Trump, with 27 percent saying it is “somewhat important.” Fifteen percent said the Republican loyalty to Trump is “not too important” and 12 percent said it isn’t important at all.

“The change in GOP rankings since 2018, when the last survey was conducted, is striking. In 2018, Republicans ranked Reagan first (36 percent), followed by Trump (10 percent). Now, the positions are reversed, with the percentage of Republicans who name Trump as the best President ever having tripled to 36 percent, twice the number who still choose Ronald Reagan (18 percent),” according to a survey from the Economist/YouGov.

Republicans who went against Trump during the impeachment trial are facing blowback from their own party. Five of seven GOP senators who voted to convict Trump have been censured by members of their party.

Senate Minority Leader Mitch McConnell (R-Ky.), who voted to acquit Trump, received severe criticism from Trump last week. He also suggested that Republicans reject McConnell’s leadership, arguing that the Senate won’t be recaptured by the GOP with the longtime Kentucky senator at the helm.