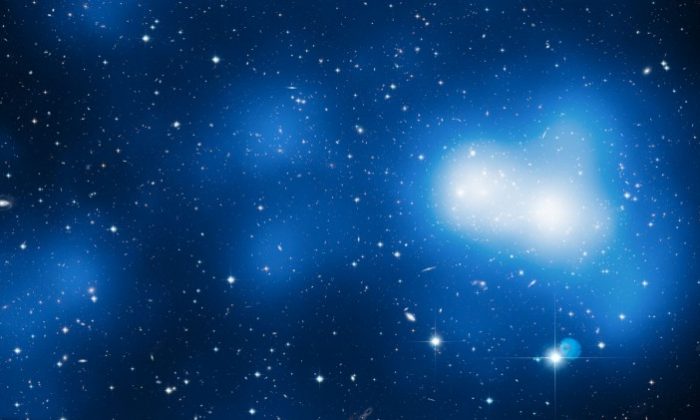 Observations of a massive filament of dark matter could be representative of the cosmic web underlying our universe, suggesting that more than half our universe’s mass is hidden in such structures.

The filament is at least 60 million light-years long and extends from a huge galaxy cluster called MACS J0717.5+3745 (MACS J0717). A new study has revealed its 3D structure using high-resolution images from the Hubble Space Telescope among others, and spectroscopic data from ground-based telescopes in Hawaii.

“From our earlier work on MACS J0717, we knew that this cluster is actively growing, and thus a prime target for a detailed study of the cosmic web,” said study co-author Harald Ebeling at the University of Hawaii in a press release.

The MACS J0717 filament is thought to be part of the large-scale web that arose straight after the alleged big bang, with variations in the density of matter leading most of the cosmos’ matter to condense into a network of filaments.

Computer simulations suggest this web contains long filaments that interconnect where large clusters of galaxies are grouped, but the filaments are mainly composed of dark matter, making them hard to observe.

The team created a model that incorporated data on all the galaxies, allowing them to measure the filament’s shape and orientation. If its high mass is comparable to that of other filaments near massive clusters, then these strands in the cosmic web could contain more than half the universe’s mass.