US investors stand to lose everything 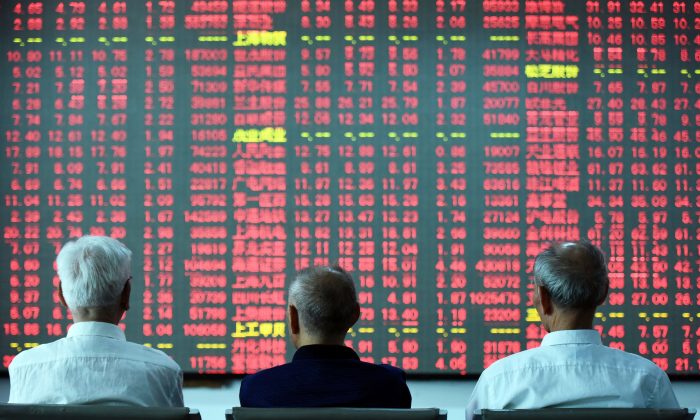 Chinese investors sit in front of a screen showing stock market movements at a securities firm in Hangzhou, China, on May 31, 2016. (STR/AFP/Getty Images)

U.S. investors have trillions of dollars invested in Chinese variable interest entities (VIE) without knowing it. These are illegal contracts under Chinese law and could be shut down by Chinese regulators at any time.

When U.S. investors buy shares of Chinese companies, particularly internet companies, on NYSE and NASDAQ, they generally don’t own shares in the actual company. They own shares in Cayman Island shell companies that have no employees and no buildings—an entity whose only assets are contracts with the real company, which are privately held back in China.

The Chinese Communist Party (CCP) restricts foreign investment in certain sectors such as education and e-commerce, the internet, and certain technologies. Others are completely off-limits, such as nuclear weapons. China doesn’t allow foreign companies to operate an internet company. They would need to have an internet provider’s license, which won’t be given to companies that have foreign investment. A way for Chinese internet companies to circumvent this rule and obtain U.S. investment is to use a VIE.

In the United States, VIEs often are formed as special purpose vehicles (SPV) to hold financial assets and to keep securitized assets off corporate balance sheets. Investors don’t participate in the profits and losses of the entity, neither do they have voting rights. Under U.S. law, public companies must disclose their relationships to VIEs.

Using a VIE, a company can control another company through contracts, rather than through ownership. The company is allowed to consolidate the operations of the VIE with the parent company as if it were a wholly owned subsidiary and include its results in its financial statements. However, in spite of the fact that they appear on the company’s balance sheet, the company doesn’t own the assets or even the revenues of the entity.

Enron used special purpose entities to borrow money and keep the debt off the company’s balance sheets. In China, VIEs are used in the opposite way. In China, the VIE rules have been created to help companies put assets on their balance sheet, even when they don’t own them.

VIEs cause problems for investors. If the owner of the VIE decides not to follow the contract, the public company has to take them to court. But these contracts are in China and the Chinese courts have ruled at times that VIE contracts are illegal and unenforceable. This means that the shareholders could lose all of their value.

In 2011, Jack Ma took Alipay out of the Alibaba Group. The group was largely owned by Yahoo and Softbank, and Alipay was taken out for fear that the Chinese regime would prohibit foreign investors from owning a third-party payment processor. Yahoo didn’t even find out that Ma had moved Alipay out of the company until after the fact, even though Yahoo believed that it had ownership. Investors were given pennies on the dollar as compensation. Later, the Alipay/Ant Group’s IPO was blocked by Chinese regulators, showing the risks associated with investing in VIEs.

In order to take advantage of U.S. capital markets, Chinese technology companies create VIEs. Shares of the public company are sold in the United States, but investors don’t understand that they don’t own the company that they believe they do. Instead, they’ve purchased shares of a foreign company that has a contractual relationship with the internet company they’re interested in.

Since VIEs are technically illegal in China, U.S. investors run the risk of arbitrary enforcement of the law. When this happens, VIE investors could wind up with nothing or having only a small fraction of their money returned. Two high-profile examples of foreign investors trying to get a Chinese court to enforce the VIE contracts are Mingsheng Bank and GigaMedia. In both cases, they failed.

In recent weeks, as Beijing has cracked down on the for-profit education sector and the tech sector; it has also cracked down on the VIE market, wiping billions of dollars off the value of Chinese stocks listed on overseas exchanges. Ending the VIE arrangement altogether could result in trillions in losses for U.S. investors.

U.S. regulators are finally waking up to the threat of Chinese VIEs. Gary Gensler, the chairman of the U.S. Securities and Exchange Commission (SEC), has announced new disclosure rules, requiring Chinese companies to be clearer with U.S. investors regarding which assets they actually own and which assets they don’t. Among other disclosures, the SEC will require Chinese companies to disclose “whether the operating company and the issuer, when applicable, received or were denied permission from Chinese authorities to list on U.S. exchanges.”