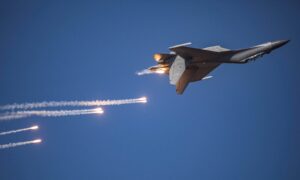 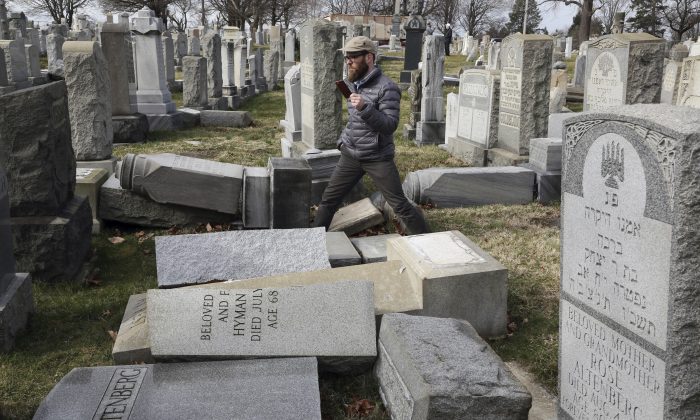 The recent desecration of a Philadelphia Jewish Cemetery follows a disturbing trend of contemptuous acts of intolerance on American soil.

These acts of hatred, prejudice, and cowardice demand of America the strongest condemnation and firmest resolve.

We must be a society of character that has the unwavering dedication to vanquishing intolerance, bigotry, and discrimination.

On Feb. 27, law enforcement officials were investigating the desecration of about 100 tombstones at Mount Carmel Cemetery in Philadelphia.  Many of these sacred headstones were not only criminally toppled but broken.

The words of Rabbi Yosef Goldman of Temple Beth Zion-Beth, who viewed the scene at Mount Carmel Cemetery expresses the violation of the sacred.  “When I got there, I saw the degree of desecration… Seeing it in person was heartbreaking… you feel the violation.”

This desecration took place shortly after another massive violation of another cemetery in St. Louis, Missouri.

Chesed Shel Emeth, one of the oldest Jewish cemeteries in the state, had more than 170 tombstones vandalized sometime during the last weekend of February.

These desecrations not only destroy property, but they violate the dignity of loved ones, families, faith-based communities, and the heart of America.

Our nation is built on the foundation of freedom of religion and this sacrosanct principle must be eternally defended.

All privileged to call America home must denounce this desecration.  All forms of hatred must be vanquished through not only through words, but by the actions of America.

Arrest Made in National Threats to Jewish Community Centers

Society can only have harmony when it is built on a foundation of respect, dignity, and tolerance.  These virtues must be expressed toward every human being, not only in life, but also in death.

All who have died deserve being remembered with dignity and the places where they rest deserve honor.

A response from a faith-based community to these reprehensible acts from the Muslim community gives hope to America.

It is a reminder that human decency is a powerful antidote to the venom of hatred.

With profound sensitivity to the desecration at the St. Louis Cemetery, members of the Muslim community united in a fundraiser to repair the damaged tombstones.

The heartwarming success of their charity resulted in the raising of over $100,000 in just over 24 hours.

This silver lining is a reminder of the decency of humanity and a celebration of goodness overcoming hatred.

The desecration of Jewish cemeteries is being compounded by pervasive bomb threats against their communities and schools.

Since the beginning of the year, bomb threats have continually disrupted the normal routines of Jewish communities.

These crimes reflect nothing less than hatred, bigotry, and discrimination and demand leadership, vigilance, and collaboration.

Bomb Threats: Have a Plan

The U.S. Department of Homeland Security website has information on a bomb threat deserving of review.

Information on the site must also be used for training initiatives and includes the following:

“Having a plan in advance makes the response to bomb threats, unattended items, or suspicious items as orderly and controlled as possible, reducing risk and the impact of false alarms on regular activities. Facility supervisors—such as school, office, or building managers responsible for the facility—should:

“School-specific bomb threat guidance can also be found at ThreatPlan.org and the Readiness and Emergency Management for Schools (REMS) Technical Assistant Center.”

While earning one of my post-graduate degrees, I wrote a paper titled “Reflections on the Holocaust.”

The work, complemented by courses to understand the Hebrew language, profoundly moved me.  It was an expression of my esteem for the Jewish people.   The work also reflected my commitment to defend humanity against hatred, bigotry, and discrimination because we are all members of the human family. Each and every human being is mystically connected as a member of humanity.

The dark chapter of the holocaust must have eternal lessons for humanity.   All of us must be completely dedicated to forever vanquishing hatred from the face of the earth.

Hatred has resurfaced in America with crimes against the Jewish community, as well as with a lack of tolerance toward anyone who is different.

America must stand against all who violate the principles of our Constitution, Bill of Rights, and every noble principle of humanity.

The character of the good people of America will rise to the occasion.  We will overcome hatred and be reawakened because tolerance, respect, and charity are the heartbeat that unites us.