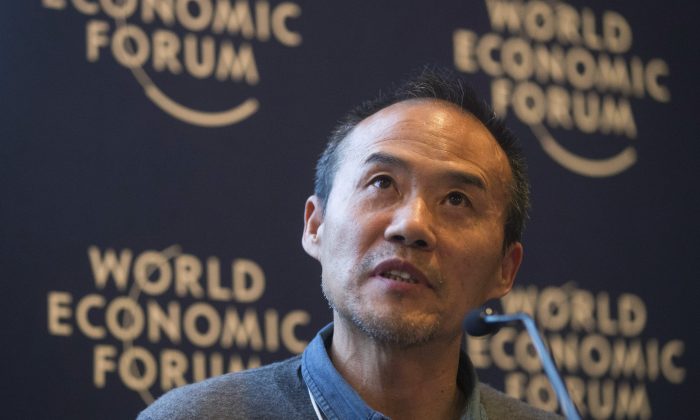 China Vanke Chairman Wang Shi speaks at the 2013 World Economic Forum, in Davos. Wang is has been in the midst of a drawn-out fight with Vanke's largest shareholder over control of the company. (AP Photo/Michel Euler)
China

China Vanke Co. Ltd., the biggest residential real estate developer in China and one of its earliest private enterprises, is mired in a public dispute with its biggest shareholders for control over the company—an almost unheard of corporate event in China’s fledgling financial markets.

How the saga plays out could serve as a litmus test for the independence and maturity of China’s capital markets.

On Dec. 18, shares of Shenzhen-based Vanke jumped past the 10-percent daily limit for the second consecutive day as rumors of a corporate takeover swirled after three affiliated companies accumulated a combined 23 percent of Vanke public shares. Vanke shares reached an eight-year high, up almost 50 percent for the month. As of Dec. 18, the property developer was trading at three times its book value.

At the company’s request, shares were suspended from trading in Shenzhen and Hong Kong.

Vanke made its money in China as a developer for middle-class homes and helped fuel the real estate boom during the last two decades. In recent years it has bought into properties abroad.

In New York, Vanke has a controlling stake in the 30-story Bush Tower office building near Bryant Park and is a joint developer of the 100 East 53rd St. Norman Foster-designed condo under construction. Last month, Vanke teamed up with local developers to acquire two sites in Brooklyn.

The three companies, all of which Vanke believes are controlled by Chinese businessman Yao Zhenhua, have overtaken China Resources Group as Vanke’s largest shareholder.

All three companies have leveraged up to purchase the shares. Jushenghua, for example, borrowed twice the amount of its own cash investment to buy Vanke’s mainland-listed shares traded in Shenzhen.

While the intentions of the shareholders remain unclear, Vanke founder and chairman Wang Shi criticized the company’s top shareholders after the announcement. Last Thursday night, users on Chinese social media revealed that Wang Shi gave a speech to Vanke’s employees, stating that Jushenghua and its affiliates do not deserve to be Vanke’s top shareholder.

Calling the group’s share accumulation “predatory,” Wang criticized Jushenghua’s excessive use of leverage in the past. He also questioned Jushenghua’s financial health, stating its accumulation of Vanke shares was funded by short-term debt and sales of highly risky wealth-management products, according to China Securities Journal, a state-controlled business media. According to Wang, Jushenghua would be required to sell its shares should the net asset value of its product fall below 0.80 yuan per unit. All three companies drew ire from Wang.

Developer Baoneng published a statement on its website Dec. 18, defending its financial wherewithal. Baoneng stated it is a 23-year-old property developer based in Shenzhen that “operates legally, respects rules and regulations, and believes in the power of the free markets.”

While Vanke stock has been identified by analysts (most recently, Morgan Stanley) as a buying opportunity, the sudden accumulation of shares on the secondary market by three mid-sized affiliated firms and the public war-of-words is a mystery.

China’s real estate prices rose for the second straight month in November, but valuations remain high and growth has been modest.

A corporate takeover fight on the public markets is rare in China. The country’s financial markets are only about 25 years old, and its legal system is unreliable and often beholden to opaque Communist Party politics. The current business environment doesn’t seem to support the type of shareholder voting and activism that can lead to hostile takeovers and corporate actions common in more mature markets.

In China, corporate takeovers are usually negotiated in private and brokered by local and provincial authorities to minimize job losses and ensure social stability. Public confrontation is a rare occurrence.

In addition to criticizing its largest shareholders, Vanke also announced unspecified plans to issue common shares, effectively triggering a “poison pill” defense. “Poison pill” is a strategy used by public companies to discourage hostile takeovers and can include giving existing shareholders rights to buy shares at a discount to dilute overall ownership.

China Resources (Holdings) Co. Ltd. was Vanke’s biggest shareholder for 15 years prior to the recent buildup by Jushenghua’s consortium. According to Bloomberg, China Resources was very supportive of Vanke’s management and helped the company expand abroad.

But China Resources is unlikely to buy more shares in Vanke to dilute the consortium’s position, a person with knowledge of the matter told Caixin Media, a China-based online financial news portal.

China Resources has not commented on its Vanke shares publicly. The source familiar with the matter told Caixin that while the state-owned conglomerate has enough cash, it still doesn’t expect to buy more Vanke stock.

The attitudes of its new top owners remain unclear.

China’s real estate sector is the biggest driver of its economic growth, and the fate of its biggest property developer is in flux. Will Beijing once again step in and interfere in the financial markets?

For now, the Communist Party regime is staying on the sidelines. A spokesman for the China Securities Regulatory Commission told reporters last week that at this time, it wouldn’t intervene in the Vanke share purchases.