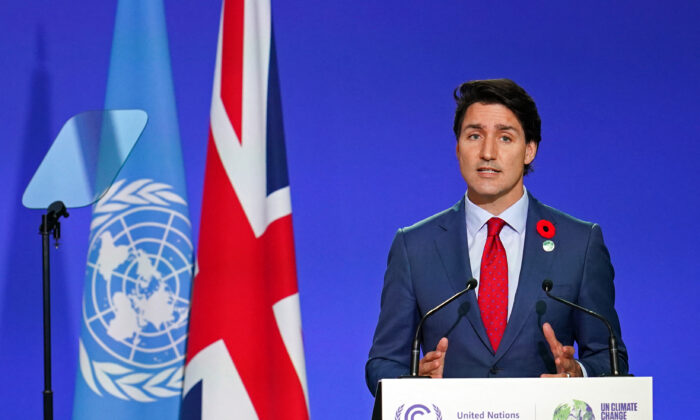 Nobody can claim that they didn’t see it coming. Putting a hard cap on emissions from Canadian oil and gas production was a plank in Justin Trudeau’s election platform this year and he is following through with it.

It sent chills through the Canadian petrochemical industry nonetheless when Trudeau formally committed to an emissions cap for the oil and gas sector during an impassioned speech at the COP26 conference in Glasgow on Nov. 1.

The cost of this commitment for Canada is going to be dire.

Trudeau’s pledge was bold as he stated, “We’ll cap oil and gas sector emissions today and ensure they decrease tomorrow at a pace and scale needed to reach net-zero by 2050.”

We know what Trudeau wants to do but we still don’t exactly know how he’s going to do it.

Putting forth aggressive targets without laying out the details on how they will be achieved is a reckless approach to policy.

Economies need stability in order to flourish, and Trudeau just destabilized an economic sector that employs over 500,000 Canadians. As our nation struggles to recover from the economic damage wrought through nearly two years of pandemic restrictions, we can’t afford to be attacking our most valuable industries.

The world is currently in the grips of an energy crisis. Large and developing nations are increasing their production and consumption of coal while European countries are bracing for energy shortages over the winter. It is an ugly irony that many countries are reverting to the dirtiest of energy sources due to shortages caused in part by green energy policies.

Prime Minister Trudeau is missing out on an opportunity to position Canada as a supplier of clean and ethically sourced energy to a world that dearly needs it.

With an approach of pragmatism rather than idealism, Trudeau could have pointed out that through increasing exports of products such as natural gas, Canada could aid the developing world in weaning themselves from burning coal or even wood to meet their energy needs. He could have stated goals of moving the world towards renewable, low emission energy sources while using clean oil and gas products to mitigate emissions along the way.

It is not an exaggeration to refer to Canadian oil and gas products as being relatively clean sources of energy. Canada’s labour and environmental standards are among the highest on earth. We should be looking at emissions intensity rather than just total emissions. Canadian energy producers have been world leaders in emissions reduction, though you wouldn’t know it from the language coming from Ottawa.

Between 2011 and 2018, GHG emissions intensity per barrel of oil from Alberta oilsands fell by 22 percent and it continues to drop. Carbon capture projects and hydrogen technology are making Canadian energy products some of the least emission-intensive on earth. Energy companies will likely be dropping investment and research into such advances as it becomes clear that it isn’t appreciated by a government that doesn’t want to clean up the industry, and wants to shut it down.

As the cost of energy continues to skyrocket, the standard of living for Canadians will decline. We can’t simply eschew energy products. We are a cold nation with a low population density. We need to heat our homes and commute to work no matter what the costs of doing so will be. Energy poverty is going to adversely impact low-income and fixed-income Canadians in the coming years as Canada works to shut in viable, affordable domestic energy sources.

Trudeau’s climate strategy will increase regional tensions within Canada, too. He made it clear that he will not be imposing restrictions upon steel, the auto industry, forestry, or cement. He just wants to hit oil and gas which are, of course, predominantly Western Canadian resources. That decision was political rather than environmental, and Western Canadians are well aware of it.

The appearance of being green is much more important to Trudeau than the reality of it. Trudeau is going to decimate Canada’s economy and threaten national unity in his quest to appear to be a leading climate crusader on the world stage.

We are going to be paying a terribly high price for the vanity project of a prime minister seeking a legacy for himself.